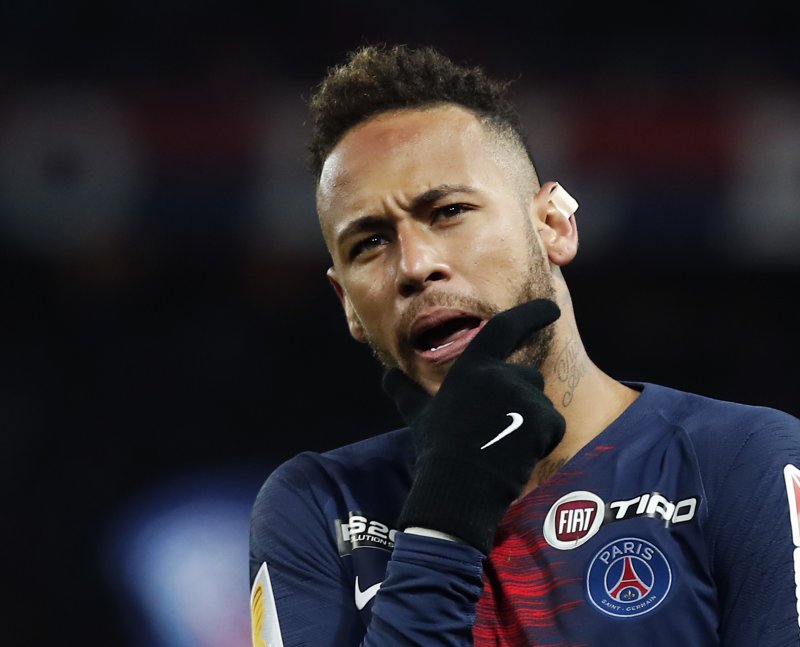 Neymar of Paris Saint Germain celebrates after scoring during the quarter final of the French League Cup's match Paris Saint-Germain (PSG) against Guingamp on Saturday at the Parc des Princes Stadium in Paris. Photo by Ian Langsdon/EPA-EFE

Jan. 19 (UPI) -- Neymar Jr. showed off his unparalleled touch for the first score in Paris Saint-Germain's 9-0 win against Guingamp on Saturday in Paris.

The Brazilian superstar made a far-post run while Dani Alves held the ball outside the box during the sequence. Alves lifted a cross with his left boot, sending the pass over the defense and curling toward the net.

Neymar used his body to trap the ball down perfectly to his foot, before he tapped the ball around a defender. Neymar then finished a shot into net, beating Marc-Aurele Caillard for first blood in the 11th minute.

Kylian Mbappe added PSG's second score in the 37th minute, off of a give-and-go with Neymar. The speedster added a second tally in the 45th minute, finishing off an Edinson Cavini assist.

PSG held a 3-0 lead at the reak before getting a score from Cavani in the 59th minute. Cavani scored again in the 66th minute to make the score 4-0.

Neymar found the net once again just two minutes later. Cavani filled out his hat-trick with a score in the 75th minute. Mbappe scored his third goal in the 80th minute.

Thomas Meunier added the final tally in the 83rd minute of the Ligue 1 bout.

PSG battles Strasbourg in the French Cup at 3:05 p.m. on Wednesday in Paris.

Odd News // 4 days ago
Michigan couple's wedding to be attended by cardboard guests
April 3 (UPI) -- A Michigan couple whose wedding plans were thrown into chaos by the coronavirus pandemic said the pews will still be full during their ceremony -- but the guests will all be made of cardboard.

Odd News // 4 days ago
Woman discovers she is sole passenger on Washington-Boston flight
April 3 (UPI) -- A woman who flew from Washington, D.C., to Boston amid the COVID-19 pandemic captured video on board the plane when she discovered she was the flight's sole passenger.

U.S. News // 4 days ago
Federal judge allows lawsuits against border wall to proceed
April 3 (UPI) -- A federal judge has ruled that President Donald Trump didn't exceed his authority last year when he declared an emergency at the U.S.-Mexico border, but allowed two lawsuits challenging his wall strategy to proceed.

U.S. News // 4 days ago
Gallup: U.S. residents hesitant to return to regular activities
April 3 (UPI) -- Concern about the coronavirus is weighing heavy on U.S. residents with only 14 percent saying they would resume their daily activities if it was up to them, according to a new Gallup poll released this week.

Odd News // 4 days ago
Stray puppy brought home by construction worker turns out to be fox cub
April 3 (UPI) -- Animal rescuers in Britain said a man who brought a stray puppy home from a construction site later discovered the animal was actually a fox cub.