July 11 (UPI) -- The Zagreb Fire Department in Croatia made a funny video, telling fans to be careful with fire during the 2018 World Cup.

The 49-second video was posted to Facebook on Tuesday. It shows a crowd of firefighters sitting in a fire station watching Croatia's quarterfinal matchup against Russia.

The 10 men sit in chairs, crowded around a small TV, before the alarm goes off to report to a fire. None of them hesitate to jump up and grab their gear, in order to report to the emergency, despite the close match.

Most of the men jump in trucks and leave the garage, while three of the men stayed behind to catch the penalty kick session of the victory.

The men stare at the TV, watching Ivan Rakitic score the game-winner in the shootout against Russia's Igor Akinfeev, sending the squad into the semifinals. They all jump up and scream, while sharing a group hug in celebration of the game-winner.

"The Fire is playing today for the semifinal," the fire department wrote in the caption on the Facebook video. "We are not fired, but we are dealing with fire. Careful when using torches and pyrotechnics, we can (finally) look at the fires [after the game]."

Health News // 13 minutes ago
New drug shows promise for pneumonia caused by COVID-19, study finds
April 6 (UPI) -- Researchers have identified a new drug that reduced the lung damage associated with COVID-19 in human lung cultures and mice, but it still needs to be tested for safety and efficacy in humans. 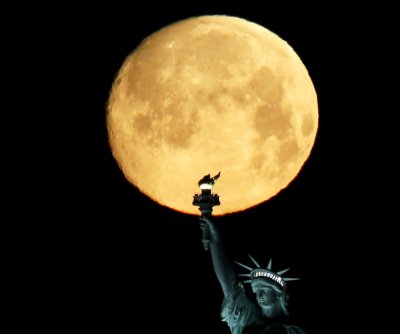 Science News // 36 minutes ago
Year's biggest supermoon to light up Tuesday's night sky
April 6 (UPI) -- Tuesday night's full moon will be the biggest of the year, as the moon is quite close to its perigee, its closest approach to Earth.

Odd News // 1 hour ago
Apartment residents use pulley system to retrieve pizza from driver
April 6 (UPI) -- A pair of Missouri residents shared video of their creative way to interact with their pizza delivery driver and retrieve their food without leaving their second-floor apartment.

Odd News // 1 hour ago
Deer taking over Calgary neighborhood during lockdown
April 6 (UPI) -- Residents of Calgary, Alberta, said the streets being emptied of travelers amid the coronavirus pandemic has led to an influx of unusual visitors -- a large herd of deer.

U.S. News // 1 hour ago
Google Maps features restaurant takeout amid COVID-19 lockdowns
April 6 (UPI) -- Google has updated its Maps app to feature eateries that have takeout and delivery options amid the coronavirus pandemic.

Health News // 1 hour ago
Spread, mitigation of COVID-19 could be tracked in municipal wastewater
April 6 (UPI) -- Researchers at the University of Arizona say they may be able to track the presence of coronavirus in communities by analyzing municipal wastewater.

Health News // 2 hours ago
Trials begin for potential COVID-19 drug remdesivir
A drug originally developed to treat Ebola is getting a second chance in the spotlight, as research teams in the United States, Asia and Europe race to test it against the new coronavirus.

World News // 2 hours ago
British PM Boris Johnson moved to intensive care for COVID-19
April 6 (UPI) -- British Prime Minister Boris Johnson was moved into an intensive-care unit Monday, as his condition from coronavirus worsened, according to a statement from Downing Street.