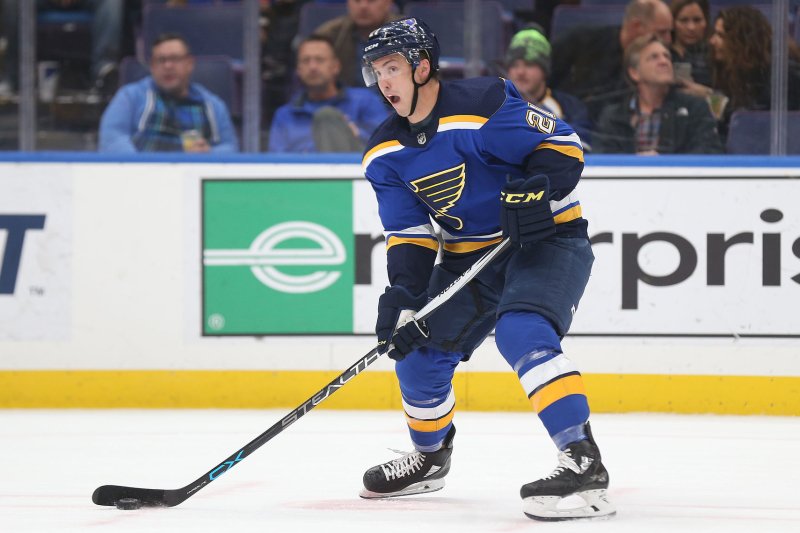 St. Louis Blues forward Tyler Bozak scored in overtime to lead his team to a playoff win over the Colorado Avalanche on Wednesday in Denver. File Photo by Bill Greenblatt/UPI | License Photo

May 26 (UPI) -- Center Tyler Bozak beat goaltender Darcy Kuemper for a score in overtime to lead the St. Louis Blues over the Colorado Avalanche in Game 5 of their Stanley Cup playoff series and stave off elimination.

"It obviously feels great," Bozak told reporters. "We are just a resilient group of guys. We got down and didn't want the season to be over. We fought hard and got some big goals late."

Avalanche center Nathan MacKinnon scored three goals and logged an assist in the loss. The Blues trailed 3-0 before they staged the comeback effort.

The Avalanche still lead the best-of-seven game series 3-2. Game 6 will be Friday in St. Louis. Game 7, if necessary, will be Sunday in Denver.

"We gotta move on, come back and win Game 6 on the road," MacKinnon said. "It's a fun opportunity for us. We gotta get this done. This should make our team more gritty in these situations."

The Avalanche scored the first of three unanswered scores when MacKinnon lit the lamp 3:51 into the first period. MacKinnon scored again, on a power play, with 1:37 left in the period and the Avalanche carried a 2-0 lead into the second.

Thomas found the net for his first score midway through the third. Blues center Jordan Kyrou beat Kuemper for a third time and tied the score with 4:46 remaining in regulation.

MacKinnon scored a go-ahead goal for the Avalanche less than two minutes later. Thomas then forced overtime when he beat Kuemper with 56 seconds remaining.

Blues left wing Pavel Buchnevich received a pass while along the right boards deep in Avalanche territory at the start of that sequence. He then slipped a pass to Tarasenko on the end line. Tarasenko fired the puck toward the net. Kuemper knocked the puck down, but it got loose in front of the net. Thomas then stuck his stick into the area and tapped the puck inside the left post to send the game to overtime.

Bozak then ended the Avalanche's hopes to clinch a Western Conference finals spot in Game 5 just minutes into the extra period. Blues center Ivan Barbashev sent a pass into the right corner on the Avalanche's end to set up the decisive score.

Bozak recovered the puck behind the Avalanche net and skated to the left side. He then sent a pass back toward the blue line, which found defenseman Nick Leddy. Leddy fired a shot, but it was deflected. Bozak gained control of the rebound and fired a long-range slap shot toward the net. The shot flew through traffic and went under Kuemper's glove to find the net.

The Blues will host the Avalanche in Game 6 at 8 p.m. EDT Friday at Enterprise Center in St. Louis.

NHL // 1 week ago
Stanley Cup Final: Kadri OT winner leads Avs over Lightning for 3-1 lead
June 23 (UPI) -- Center Nazem Kadri scored 12:02 into overtime to lead the Colorado Avalanche to a narrow win over the Tampa Bay Lightning in Game 4 of the 2022 Stanley Cup Final. The Avalanche are one win from the NHL title.

NHL // 2 weeks ago
NHL won't allow Stanley Cup trips to Russia, Belarus
June 16 (UPI) -- The winners of this year's Stanley Cup Final will not be allowed to bring the trophy to Russia or Belarus due to the war in Ukraine, NHL deputy commissioner Bill Daly said at a news conference.