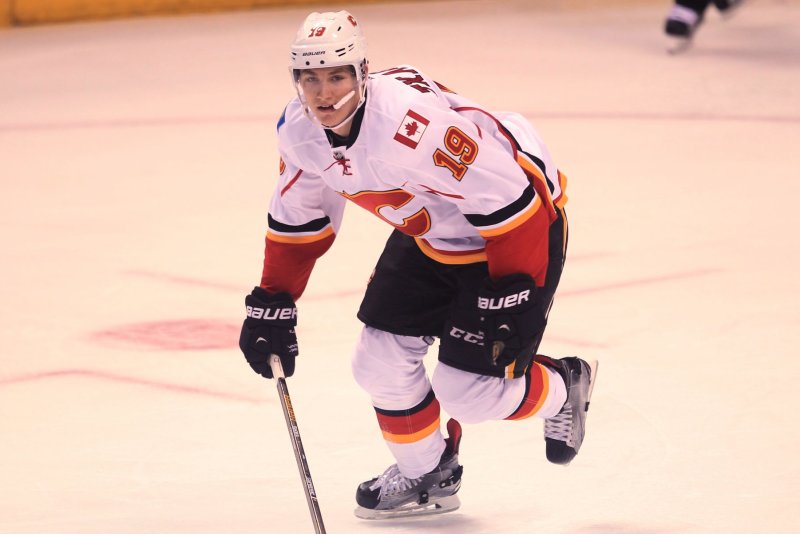 The Flames blew a four-goal lead, but scored three times in the third period of the hockey triumph Wednesday at Scotiabank Saddledome in Calgary, Alberta. Flames center Blake Coleman scored twice in the victory. Left wing Andrew Mangiapane chipped in a goal and two assists.

"That was probably our worst game of the playoffs so far," Tkachuk told reporters. "We got super lucky. That's just not the recipe for success.

"We won this one, but we aren't going to win many more if we play like that."

Left wing Zach Hyman scored twice for the Oilers. Star center Connor McDavid logged a goal and three assists in the loss. The Oilers pulled starting goaltender Mike Smith out of the net in the first period.

Game 2 of the best-of-seven NHL Stanley Cup playoffs series will be Friday in Calgary.

"We fought back and made it a game, but we can't feel good about that in any way because we scored six goals in a game and found a way to not win it," Oilers coach Jay Woodcroft said. "There are a lot of things for us to clean up."

Center Elias Lindholm lit the lamp to give the Flames an early edge just 26 seconds into the game. Mangiapane doubled the lead 15 seconds later. Flames right wing Brett Ritchie pushed the lead to three goals with another score 6:05 into the first period.

McDavid scored the final goal of the period less than two minutes later.

Coleman pushed the Flames lead back to three when he scored 45 seconds into the second. He added his second score 6:10 into the period, which gave the Flames a 5-1 lead.

Defenseman Evan Bouchard scored a minute later, but Tkachuk answered with a power-play goal 74 seconds after the Oilers' second score.

Hyman then sparked the Oilers' rally midway through the period. He beat Flames net minder Jacob Markstrom for his first score 9:38 into the period. He found the net again with 5:54 left in the frame. Oilers center Leon Draisaitl scored the final goal of the period with 39 seconds remaining.

Oilers right wing Kailer Yamamoto then tied the score 1:28 into the third, but the Flames rallied to snatch Game 1.

Defenseman Rasmus Andersson beat replacement goaltender Mikko Koskinen for the first goal of the rally 2:57 into the third period.

Tkachuk then scored the final two goals of the game to seal the victory. His first score came after Draisaitl attempted to send the puck up the ice, but instead hit right wing Jesse Puljujarvi's skate with his pass. Tkachuk took control of the loose puck and fired a backhanded wrist shot between Koskinen's legs and into the net.

The final score of the night came off assists from center Elias Lindholm 28 and left wing 13 Johnny Gaudreau. Gaudreau held the puck on the left boards and fired a pass up to Lindholm between the blue lines. Lindholm then passed to Tkachuk on his right. The Flames forward ended the play with a deep shot into the Oilers' empty net.