May 12 (UPI) -- Carter Verhaeghe logged two scores and three assists to help the Florida Panthers rally from a 3-0 deficit and beat the Washington Capitals in Game 5 of the first-round Eastern Conference Stanley Cup playoff series.

Panthers right wing Claude Giroux chipped in a goal and an assist in the 5-3 victory Wednesday at the FLA Live Arena in Sunrise, Fla.

"I think we kinda took over in the second" period, Verhaeghe told reporters. "We were making plays, playing the right way and getting pucks on net. That's what happens when we play the right way."

The Panthers, who own a 3-2 series lead, can advance to the Eastern Conference semifinals with another win.

"We know we are up right now, but you can't really think too much ahead," Panthers forward Aleksander Barkov said. "You just think about the next shift, the next game, the next period and do your best. That's it.

"Just get ready for the next game."

Veteran right wing T.J. Oshie lit the lamp with a power-play score 7:09 into the first period to give the Capitals an early lead. Defenseman Justin Schultz doubled the Capitals advantage with another score 2:13 into the second.

Oshie increased the lead once more when he beat Panthers net minder Sergei Bobrovsky for a third time about 85 seconds later.

Verhaeghe sparked the rally about 3:12 later. The forward brought the puck down the right flank and sent a pass between the circles. Fellow forward Aleksander Barkov then sent a shot toward the net, but the attempt went wide and bounced back in front of the right post. Verhaeghe cleaned up the shot with a quick second attempt to beat Capitals goalie Ilya Samsonov.

Panthers winger Patric Hornqvist made the score 3-2 with another score 12:27 into the second. Verhaeghe picked up his first assist on that goal.

He also helped center Sam Reinhart even the score about 2:14 later.

Verhaeghe fought for the puck on the right boards and sent a pass behind the net to spark that score. He then sent a pass to Reinhart, who put the puck back in front of the net. Verhaeghe's initial shot was blocked, but Reinhart netted a follow-up attempt on Samsonov's stick side.

Verhaeghe scored his second goal 3:04 into the third on another Barkov assist. He then teamed up with defenseman Gustav Forsling to assist Giroux for the last goal of the game with 4:05 remaining.

Bobrovsky totaled 30 saves for the Panthers. Samsonov made 33 stops for the Capitals.

The Capitals will host the Panthers in Game 6 at 7:30 p.m. EDT Friday at Capital One Arena in Washington. Game 6, if necessary, would be Sunday in Sunrise.

NHL // 23 hours ago
Panarin beats Penguins in OT, Rangers rally to advance in Stanley Cup playoffs
May 16 (UPI) -- Star winger Artemi Panarin whipped a wrist shot through traffic for a clutch overtime score, leading the New York Rangers past the Pittsburgh Penguins and into the second round of the Stanley Cup playoffs. 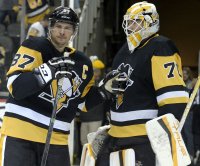 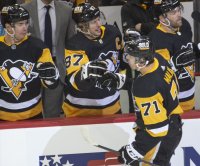