Oilers head coach Dave Tippett told reporters that forward Derek Ryan also tested positive for the coronavirus. McDavid and Ryan were held out of Tuesday's practice and were scheduled to undergo additional testing later in the day.

"They both tested positive this morning, so they'll have another test today and we will see where they are at," Tippett said. "Kept them off for precaution, and the way things are going here, this is a daily occurrence.

"When you play in as many cities and there's different rules everywhere you go, it's crazy. They just tell me if he's positive, then he's positive. When two of your four centermen are out and one of them is Connor McDavid, that's not a positive."

The 24-year-old McDavid also is a fixture on the Oilers' lethal power-play unit. He has notched five goals this season with the man advantage, and he is averaging 22:30 time on the ice.

Since returning from the league's COVID-19 pause, the Oilers have dropped four straight games -- all on the road. Edmonton is scheduled to play the Toronto Maple Leafs on Wednesday.

NHL // 5 hours ago
Josh Manson nets overtime winner, leads Avalanche over Blues in Game 1
May 18 (UPI) -- Defenseman Josh Manson flipped in a long-range wrist shot 8:02 into overtime to lead the Colorado Avalanche to a narrow win over the St. Louis Blues in Game 1 of a Western Conference semifinals series.

NHL // 2 days ago
Panarin beats Penguins in OT, Rangers rally to advance in Stanley Cup playoffs
May 16 (UPI) -- Star winger Artemi Panarin whipped a wrist shot through traffic for a clutch overtime score, leading the New York Rangers past the Pittsburgh Penguins and into the second round of the Stanley Cup playoffs. 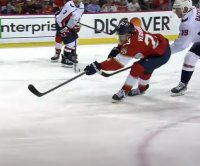 NHL // 1 week ago
Crosby, Penguins score five goals in second, take 3-1 series lead on Rangers
May 10 (UPI) -- Sidney Crosby logged a goal and two assists and the Pittsburgh Penguins scored five times in the second period to spark a 7-2 win over the New York Rangers in Game 4 of their first-round Stanley Cup playoff series.

NHL // 1 week ago
Makar, Avalanche win in OT for 2-0 playoff series lead on Predators
May 6 (UPI) -- Defenseman Cale Makar ripped a deep shot through traffic to beat goaltender Connor Ingram in overtime and lead the Colorado Avalanche to a win over the Nashville Predators in Game 2 of their Stanley Cup playoff series.
Advertisement