The NHL announced the suspension Monday. Sources told Front Office Sports, The Athletic and ESPN that Kane's suspension came as a result of an investigation into allegations that he submitted a fake vaccination card to the Sharks and NHL.

The NHL also said Monday that a separate investigation into Kane, relating to domestic abuse allegations made by his estranged wife, could not be sustained.

Earlier this year, the NHL investigated Kane based on allegations of betting on hockey games. The league announced in September that it found "no evidence" of the gambling.

He did not participate in Sharks training camp or any of their games this season. Monday's NHL ruling marks Kane's sixth suspension.

"I would like to apologize to my teammates, the San Jose Sharks organization, and all Sharks fans for violating the NHL COVID protocols," Kane said in a statement, through the National Hockey League Players Association. "I made a mistake, one I sincerely regret and take responsibility for.

Advertisement
RELATED Penguins' Sidney Crosby to miss opener, vies to return in a 'week or two'

"During my suspension, I will continue to participate in counseling to help me make better decisions in the future. When my suspension is over, I plan to return to the ice with great effort, determination and love for the game of hockey."

"While we are encouraged by Evander's commitment to moving forward, we are extremely disappointed by his disregard for the health and safety protocols put in place by the NHL and the NHLPA," the Sharks said Monday in a statement.

"We will not be commenting further on Evander's status prior to the conclusion of the NHL's mandated suspension."

Kane is not eligible to return to the Sharks until Nov. 30. The Sharks face the Montreal Canadiens at 7 p.m. EDT Tuesday at the Bell Centre in Montreal. 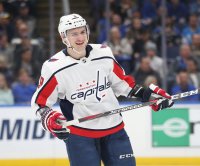