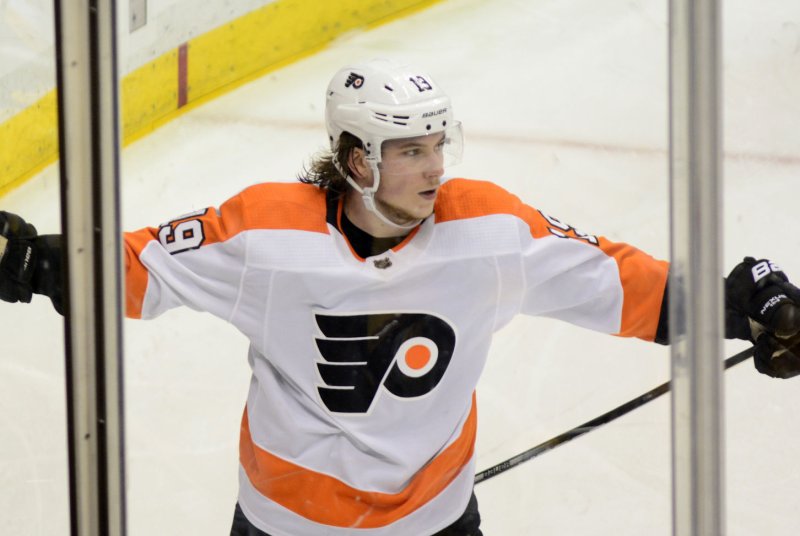 Philadelphia Flyers center Nolan Patrick (19) had two goals and two assists in a win against the Minnesota Wild on Monday in Philadelphia. Photo by Archie Carpenter/UPI | License Photo

Jan. 15 (UPI) -- Nolan Patrick got creative by pulling his stick between his legs and scoring during the Philadelphia Flyers' win against the Minnesota Wild.

Patrick pulled off the stunning shot in the second period of the Flyers' 7-4 triumph on Monday at the Wells Fargo Center in Philadelphia. The score gave Philadelphia a 4-3 advantage.

Travis Sanheim received the puck on the play and fired a rifle shot toward the net, but the attempt sailed wide left. The puck bounced off of the boards and came out to Patrick. The Flyers center collected the puck and slid it between his legs with his stick before shooting a shot behind his right foot. The shot beat Wild keeper Devan Dubnyk into an empty net to light the lamp for a seventh time.

Sanheim and Shayne Gostisbehere picked up the assists on the play.

Jason Zucker and Joel Eriksson Ek each scored to give the Wild an early 2-0 lead in the first period. James van Riemsdyk then scored twice down the stretch to tie the score at 2-2 at the end of the opening frame.

Marcus Foligno gave the Wild a 3-2 advantage with a score 2:23 into the second period. Patrick then answered with his first score of the game to tie the score. He gave Philadelphia the lead about 10 minutes later with his between-the-legs effort.

Wayne Simmonds scored his 14th goal of the season to increase the Flyers' lead to two goals with six seconds remaining in the second period. Ryan Suter lit the lamp for the Wild 8:18 into the final frame to close the gap to one score.

Simmonds and van Riemsdyk answered by lighting the lamp again down the stretch for Philadelphia.

"You just keep trying to do things to help the team," Patrick told reporters. "If it's not scoring, I was just trying to play a good two-way game and it would eventually come. I didn't think it would take that long, but it happened."

Patrick picked up two goals and two assists in the win. The Flyers host the Boston Bruins at 7:30 p.m. on Wednesday in Philadelphia.