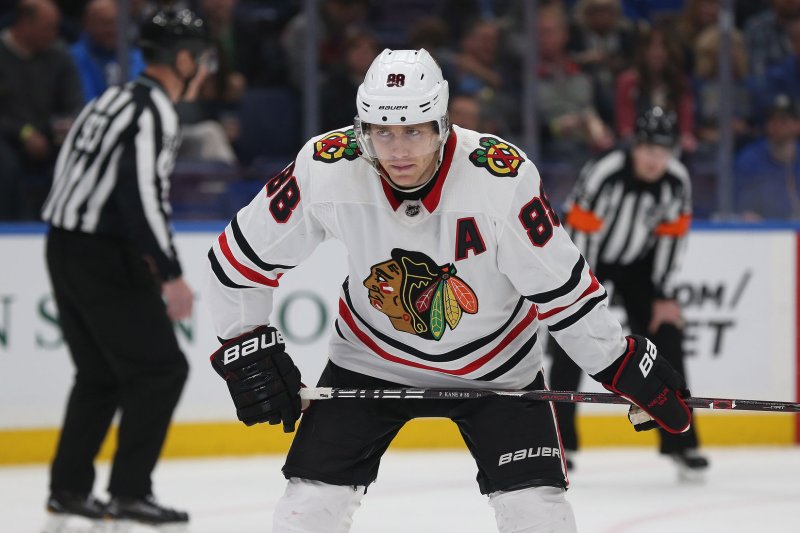 CHICAGO -- As accustomed as the Chicago Blackhawks are to winning, dealing with losing certainly hasn't been easy.

But as the Blackhawks prepare to face the Florida Panthers on Sunday at the United Center, veterans like Jonathan Toews and Patrick Kane are seeing confidence begin to build as the players continue to adjust to the style of coach Jeremy Colliton.

As Chicago also deals with starting goalie Corey Crawford being out of the lineup again while he remains on injured reserve (concussion protocol), the Blackhawks are seeing signs of improvement.

Case in point? A 2-1 victory over the Colorado Avalanche on Friday when the Blackhawks improved to 4-1-1 in their last six games.

In Friday's victory, goalie Collin Delia made 35 saves in his season debut and only his third NHL career start. Delia was recalled from the Blackhawks' American Hockey League affiliate when Crawford was placed on injured reserve.

Chicago's Artem Anisimov snapped a 1-1 tie less than two minutes into the third period and then Delia preserved the victory -- the Blackhawks' third straight -- which should provide some momentum heading into Sunday's game against the Panthers.

But the recent success hasn't made losing any easier, especially after the Blackhawks' struggles cost Joel Quenneville his job on Nov. 6.

"It's something I'm definitely trying to manage better," Toews said, according to the Tribune. "It's a long season if you're carrying the weight of each loss with you into the next one.

"It's just reminding yourself what went wrong in the last game and carrying the motivation to be better in the next one and learn from your mistakes but also let it not wear down your confidence."

The Panthers, meanwhile, will be playing Sunday's game as the back end of a back-to-back. Florida edged the Detroit Red Wings 2-1 on Saturday to capture its third win in its past four games.

The Panthers held on for the victory after first-period goals by Mike Hoffman and Evgenii Dadonov.

On Sunday, Florida will wrap up a four-game road trip in which the Panthers have endured two losses by more than four goals. The Panthers were able to get back on track with Saturday's victory but won't be able to take the Blackhawks lightly, especially with how well Chicago has played of late.

The Panthers realize they have enough to concern themselves with on their own.

"We are going to lose games against good teams on the road," Panthers coach Bob Boughner said Friday, according to The Athletic. "That's just going to happen. ... It's how you win and how you lose."

Now, with a victory under the Panthers' belt, they will attempt to keep moving in the right direction.

"It was good to come back and give this effort," forward Jonathan Huberdeau said Saturday in a postgame interview with Fox Sports Florida. " ... But it's back-to-back and we have to be ready for (Sunday). It's just before Christmas and it's going to be much better if we win (Sunday) and get some rest and come back for the second half."