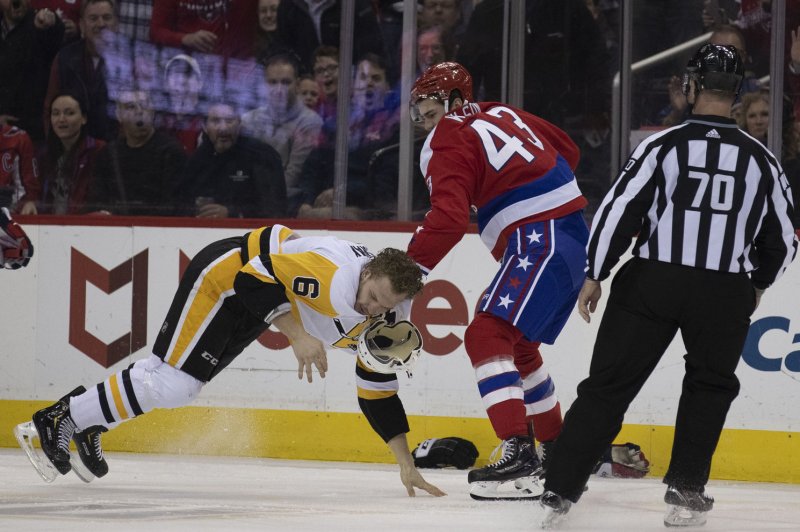 Dec. 20 (UPI) -- Tom Wilson punched Jamie Olesiak in the face and sent him to the ice in the opening minute of the Pittsburgh Penguins' win against the Washington Capitals.

The fight occurred 55 seconds into the Penguins 2-1 triumph on Wednesday at Capital One Arena in Washington, D.C.

Washington was skating up in transition during the sequence. Olesiak delivered a hit against the Capitals' Matt Niskanen along the boards before he skated up the ice. But Wilson had his eyes set on the Penguins' 6-foot-7 defenseman.

Wilson curled back behind the puck and dropped his gloves as he came flying toward Olesiak. He pushed him into the boards before the two began to exchange punches. Olesiak got in a few good jabs before Wilson got warmed up. The Capitals right wing ended things with a big right-handed hook, forcing Olesiak to fall to the ice.

Both players were sent to the penalty box with five-minute major penalties. Olesiak had a large gash under his left eye.

"He came out pretty aggressive right on the first shift there," Wilson told reporters. "He went a long way to make that hit. Right when we looked at each other it was on. That's hockey."

Lars Eller lit the lamp first for Washington in the second period following a scoreless first frame. Sidney Crosby and Bryan Rust answered back for the Penguins in the same period. Neither team netted a score down the stretch.

Olesiak did not return to the ice following the scuffle.

Wilson picked up the assist on Eller's fifth goal of the season. He had two hits in the game. The veteran winger is 2-0 in fights this season, according to HockeyFights.com. He was named the winner of Wednesday's melee by 94.1 percent of the vote.

"I'm not surprised by it," Capitals coach Todd Reirden said. "But at the same time I wouldn't have been surprised if nothing happened either so it was an important metro game. It was a situation where it was five minutes either way ... I think if it was gonna happen, I expected it to happen like that. It's two competitive guys and two tough guys."

The Capitals face the Buffalo Sabres at 7 p.m. on Friday at Capital One Arena. The Penguins host the Minnesota Wild at 7 p.m. on Thursday at PPG Paints Arena in Pittsburgh.