Kings get first crack at Golden Knights since playoffs 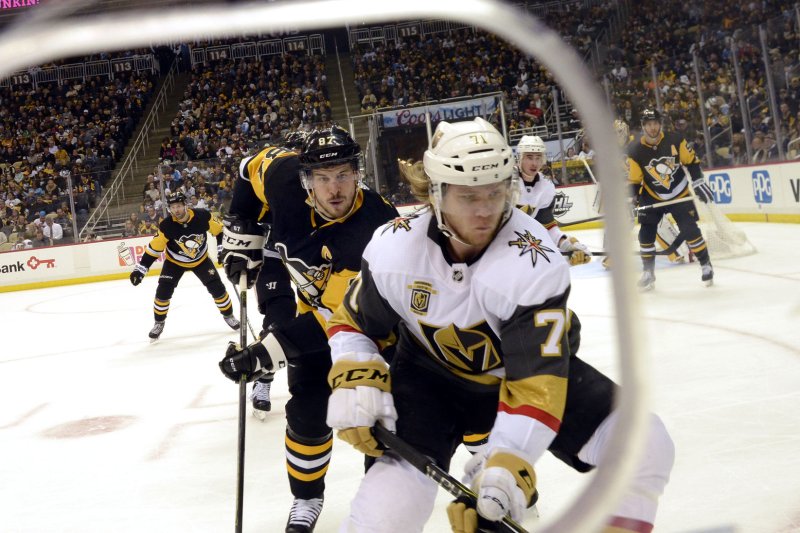 The Los Angeles Kings and Vegas Golden Knights will get together Saturday afternoon at Staples Center for the first time since they met in the first round of the playoffs last spring.

The Golden Knights swept the Kings en route to advancing to the Stanley Cup Finals.

Vegas is rolling again after a slow start to the season, and Los Angeles is still trying to pick itself back up.

The Kings (10-18-1) have lost four of their past five games and have yet to win three in a row this season. Tension has been growing in the locker room, and veteran defenseman Drew Doughty had plenty to say after a 6-3 loss Thursday night to the visiting New Jersey Devils, who came in last in the Eastern Conference.

RELATED Vancouver hockey squad to dress like Buddy the Elf

"I just don't see enough emotion from the entire group to get us out of this," Doughty told reporters. "It's not going to take three or four different guys every night. It's got to take the entire group, and I know that no one's seeing the emotion out there. ... We're playing with a lack of emotion, and that's the bottom line."

The Golden Knights (16-13-1) have won seven of eight to move into the second wild-card spot from the Western Conference.

Vegas has received 14 goals from 11 different players in the past four games.

"We're finding scoring coming from a lot of different places and that's huge," said Vegas right wing Reilly Smith, who scored in a 4-3 win over the visiting Chicago Blackhawks on Thursday. "That gave us a lot of success last year, and I think that's what you're starting to see right now. A lot of different people are contributing right now, and it's easy to win games when we're a balanced team and rolling over lines."

The Golden Knights are scheduled to turn around and host the Dallas Stars on Sunday evening before embarking on a four-game Eastern Conference road trip.

Marc-Andre Fleury has started the past eight games in goal for Vegas, and coach Gerard Gallant will likely opt to save Fleury for Sunday's matchup against Dallas, which came into Friday tied in points with the Golden Knights (33).

That would give Malcolm Subban his first start since Nov. 19, when he allowed seven goals in a 7-2 loss to the Calgary Flames. Subban has lost all four of his starts this season and owns a 4.02 goals-against average and .859 save percentage.

The Kings haven't been making games tough on many goalies this season.

They rank last in the NHL at 2.10 goals per game and had been held to two or fewer before scoring three against the Devils on Thursday. New Jersey had given up 28 goals while losing their previous six games, however.

Doughty said the Kings need to improve more than just their scoring. They need to be a more difficult team to play against physically.

"We're not as skilled as the other teams. That's just the bottom line," he said. "We have to be a physical team. We have to be a hard team to play against. We have to have teams come in here and be like, 'Oh, no, we've got to play the LA Kings again in their arena,' you know?