Jets appear set to get Dustin Byfuglien, Dmitry Kulikov back vs. Blues

By
Geoff Kirbyson, The Sports Xchange 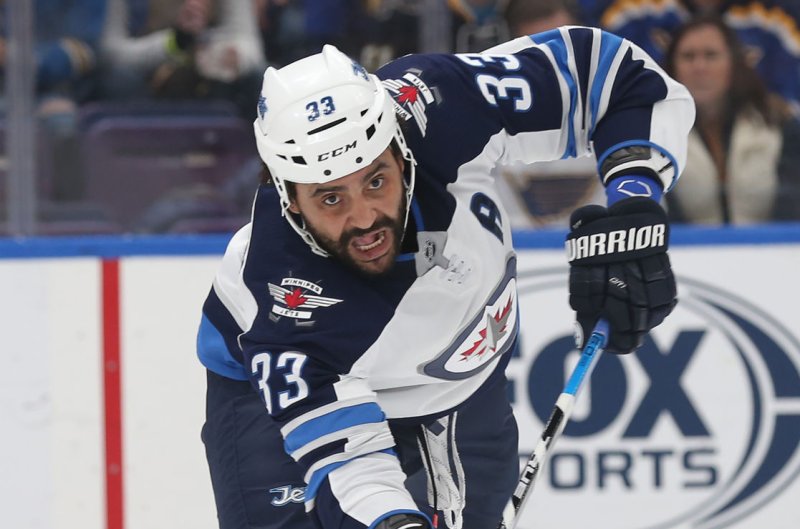 Winnipeg Jets defenseman Dustin Byfuglien shoots the puck in the first period against the St. Louis Blues on February 23, 2018 at the Scottrade Center in St. Louis. Photo by Bill Greenblatt/UPI | License Photo

WINNIPEG, Manitoba -- The Winnipeg Jets are hoping to welcome back a pair of defensemen in time for Friday night's tilt against the St. Louis Blues at Bell MTS Place.

Dustin Byfuglien has missed three games after suffering a concussion following a hard hit against Pittsburgh Penguins defenseman Jamie Oleksiak on Nov. 29, while Dmitry Kulikov has been out for a month since being hurt against the Colorado Avalanche.

Nothing has been confirmed by the Jets coaching staff but the team sent call-up Nelson Nogier back to the Manitoba Moose Thursday morning, all but indicating that one or both of them will return to the lineup on Friday.

They both wore full-contact jerseys at practice on Thursday. Byfuglien's long-time partner, Ben Chiarot, was glad to see the 265-pounder back on the ice taking part in line rushes.

"He's a big part of our team, a big part of the locker room and one of the best players in the league," he said in a post-practice scrum. "Any time you add him back, it's a welcome sight."

Another pillar on the Jets blueline, Josh Morrissey, has also missed one game with a lower-body injury. Neither he, nor forward Andrew Copp or defenseman Joe Morrow practiced on Thursday.

Nobody on the Jets is going to complain too loudly about getting hit by the injury bug as the team has lost among the fewest player-games in the entire league. Sami Niku, Cam Schilling and Nogier have all filled in well for the most part, with just a few hiccups.

Despite the sudden rash of injuries, the Jets are riding a four-game winning streak and sit in third place in the Central Division with 36 points.

Friday's game will be the first meeting between the two teams since sniper Patrik Laine lit up St. Louis for five goals in an 8-4 road victory on Nov. 24. The Blues come to town having lost four of their previous five games and sit second-last in the Western Conference with nine wins in 26 games and 22 points.

The most recent defeat, a 3-2 shootout loss in Edmonton, came after the Blues took a 2-0 lead in the first period and gave up a last-minute goal to send it to the extra period.

Interim coach Craig Berube, who took over behind the bench after Mike Yeo was fired last month, told The St. Louis Dispatch that his team is "fragile."

"Guys are trying to hang on to a lead instead of making it 3-0. That's gotta be more of our mindset. We should've come out in the second period and pushed the pace right away on them," he said.

Including the Blues, every team on the Jets four-game homestand has undergone some kind of upheaval lately -- Philadelphia Flyers on Sunday (fired their general manager Ron Hextall two weeks ago), Chicago Blackhawks on Tuesday (fired coach Joel Quenneville on Nov. 6) and Edmonton Oilers (fired coach Todd McLellan on Nov. 20).