Calle Jarnkrok to lead Predators vs. Lightning after hat trick

By Bucky Dent, The Sports Xchange

Since becoming the Nashville Predators' head coach before the 2014-15 season, Peter Laviolette has frequently sung the praises of forward Calle Jarnkrok, trumpeting his versatility and ability to play a 200-foot game.

Never has Jarnkrok proven more valuable to Nashville than during Saturday night's 5-3 win over the Los Angeles Kings. After tallying an even-strength goal in the second period, he tied the score with a power-play marker at 5:44 of the third period, then untied it with a shorthanded goal at 11:54.

Not only was it the first hat trick of his career, it was just the second time in franchise history a player had scored an even-strength, power-play and shorthanded goal in the same game. It was also just the seventh time since 2013-14 it has happened in an NHL game.

Jarnkrok will try for an encore Monday night when the Predators entertain the Tampa Bay Lightning in a marquee matchup at Bridgestone Arena.

"I thought he played terrific," Laviolette said of Jarnkrok. "Forget about the goals, it was just the game in general. I thought he was really moving, he was competing, did an excellent job on his line and got a power-play opportunity. He certainly did a good job at that as well. The shorthanded goal is a real big goal."

Jarnkrok's career night allowed Nashville (14-5-1) to snap a three-game losing streak and maintain its Central Division lead over Minnesota. The Predators also tied two other teams for the league lead with 14 victories.

One of those teams is Tampa Bay (14-5-1), which went into overtime Saturday to outlast Philadelphia 6-5. The Lightning blew a 5-1 lead with less than 10 minutes left in regulation, coughing up four goals in just over six minutes. But they emerged with two points as Anthony Cirelli notched his fourth goal 1:47 into the extra period.

Tampa Bay head coach Jon Cooper was relieved to pick up the win, but called the performance one of the five worst by his team this year.

"It was a weird game," he said. "We're up 5-1 and I don't think the game felt like we were up 5-1. And it started getting physical there. It kind of gave the crowd a little bit of life. Then they started getting breaks they probably deserved. From a coach's perspective, it's probably not one you're too happy with, but I'm sure the fans were pretty entertained."

The Lightning lead the league in goals, averaging more than 3 1/2 per game with great depth up front. But the absence of goalie Andrei Vasilevskiy, who's out for at least another month to six weeks with a broken foot, has left them vulnerable defensively.

Former Arizona backup Louis Domingue is the team's present starter. His 3.58 goals-against average and .889 save percentage will remind no one of Vasilevskiy, although Domingue did score an overtime win last year in Nashville. 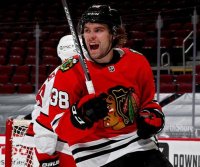