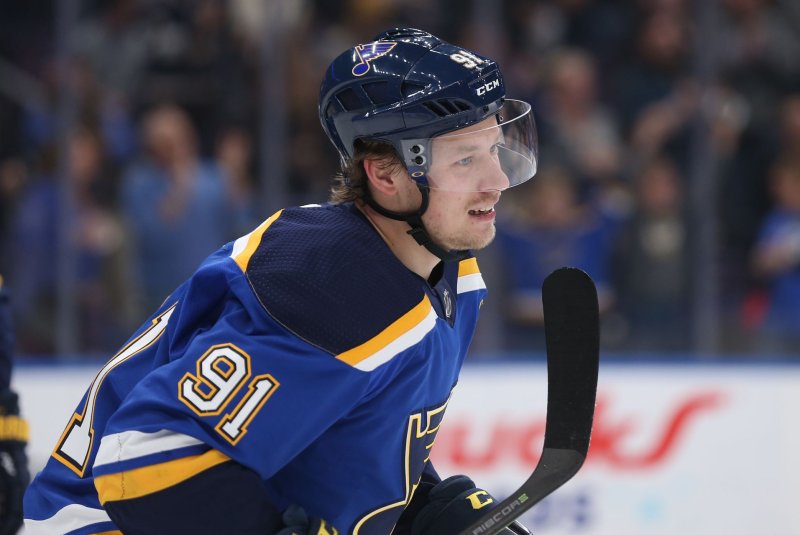 St. Louis Blues winger Vladimir Tarasenko lost a tooth in the second period of a 1-0 loss to the Chicago Blackhawks on Wednesday at the United Center in Chicago. Photo by Bill Greenblatt/UPI | License Photo

Nov. 15 (UPI) -- St. Louis Blues Right wing Vladimir Tarasenko left a tooth on the ice after being hit with a hockey stick during a 1-0 loss to the Chicago Blackhawks.

The play came in the second period of the Blues' setback on Wednesday at the United Center in Chicago.

Tarasenko was defending on the play when Blackhawks center Dominik Kahun skated back to chase down a loose puck. Kahun lifted his stick as he pursued the puck, throwing it behind his body and hooking Tarasenko right in the mouth.

Tarasenko immediately clutched his teeth and picked up the one that had fallen on the ice. He handed it to a trainer and smiled about the new gap in the middle of his top row of chompers.

Brent Seabrook scored the only goal of the game in the same period, netting a shot past Blues keeper Jake Allen on a power play at the 4:05 mark in the second frame.

The Blues winger had three shots on goal, two hits and two penalty minutes in the loss. St. Louis battles the Las Vegas Golden Knights at 10 p.m. on Friday at T-Mobile Arena in Las Vegas. The Blackhawks host the Los Angeles Kings at 8:30 p.m. on Friday at the United Center.

Predators, Coyotes look to bounce back Flames hope to get back on track vs. Habs Devils seek cure to road woes against Flyers