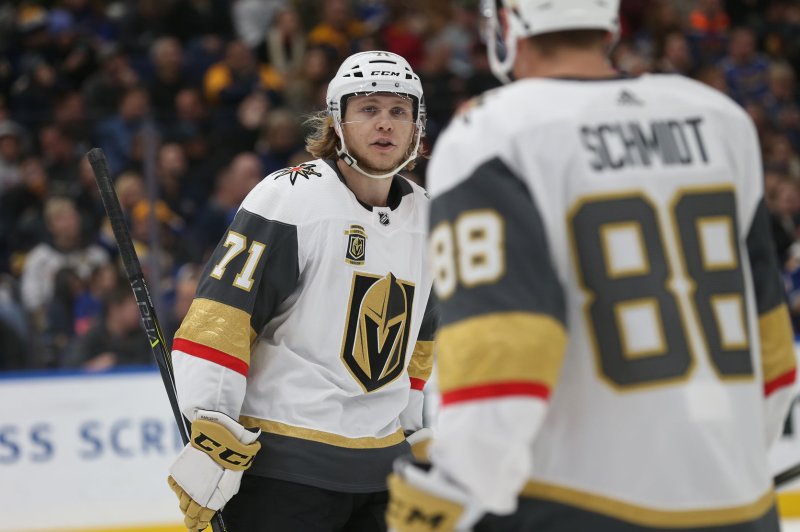 May 29 (UPI) -- Nine different players scored in the Vegas Golden Knights' Game 1 victory against the Washington Capitals in the Stanley Cup finals.

The Golden Knights emerged from the shootout with a 6-4 triumph Monday at T-Mobile Arena in Las Vegas.

"As long as you win at the end of the night," Golden Knights coach Gerard Gallant told reporters. "I'm sure Barry [Trotz] is not happy with that game and I'm not overly happy with that game. But the bottom line is we won the game so we're going to be a lot happier than they are. It was a bit of a sloppy game. Two teams feeling each other out. I'm sure the next game is going to be a better game."

Colin Miller lit the lamp first, beating Braden Holtby 7:15 into the first period on a power play and securing a 1-0 lead on the home ice. But Brett Connolly tied it up for the Capitals 7:26 later. Connolly deflected a Michal Kempny shot past Marc-Andre Fleury on that score.

Washington jumped ahead 2-0 with a score from Nicklas Backstrom 42 seconds later. William Karlsson tied the score with 1:41 left in the frame, putting another shot past Holtby after snatching a rebound from behind the Capitals net.

Reilly Smith gave the Golden Knights their second lead of Game 1 when he beat Holtby 3:21 into the second period. Smith waited on Holtby's glove side on that play, before eventually getting a pass from Deryk Engelland and putting it on net for a 3-2 edge.

But Washington answered back once again, getting a score from John Carlson 5:08 later. Tom Wilson added another goal 1:10 into the third period for a 4-3 advantage for the road squad.

Then Vegas put the game away.

Ryan Reaves tied the game at 4-4 by beating Holtby 2:41 into the final frame. He cleaned up a loose puck after it bounced around near the net on that play. Holtby stood strong between the pipes, but eventually surrendered the game to the Golden Knights.

Shea Theodore found Tomas Nosek for a score at the far post 9:44 into the third period, giving Vegas a late lead. Nosek put the game away with three seconds remaining, taking a David Perron pass down the ice on a one-man breakaway and sliding the puck into an empty net.

All three of Vegas' third period goals came from its fourth line.

"It's a lot of fun obviously to be in the finals and play for a Stanley Cup," Nosek said.

Vegas and Washington take the ice for Game 2 at 8 p.m. Wednesday in Las Vegas.