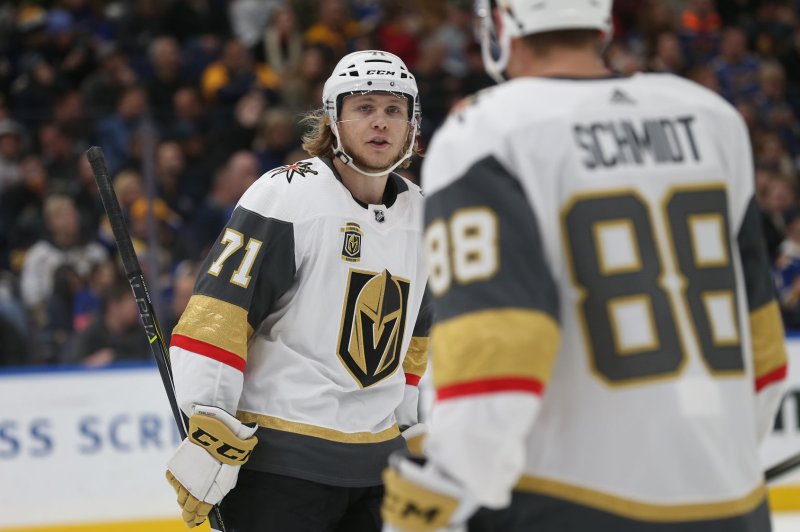 "I had a couple seconds to take my time," Karlsson told reporters Monday at SAP Center in San Jose, Calif.

"To get away with the shot. Yeah, it was a good shot."

Vegas now leads the Stanley Cup playoff series 2-1. The Golden Knights fell down early, but scored three unanswered goals in the second period to take control of the game.

Sharks right wing Wimo Meier lit the lamp first in the Western Conference showdown. Left wing Mikkel Boedker belted a slap shot, but it was deflected by the defense. Chris Tierney collected the rebound and fired a pass to Meier on his right. The 21-year-old ripped a one-timer past Marc-Andre Fleury for the first score of the game.

Colin Miller sparked the Golden Knights' comeback 2:41 later. Left winger James Neal found Miller at the back door on the play. He blew a shot by Martin Jones to tie the game.

Jonathan Marchessault scored his second goal of the playoffs 13:09 into the second frame, giving the Golden Knights a 2-1 edge. Reilly Smith used feeds from Karlsson and Marchessault to earn a 3-1 lead 1:17 later.

Wild Bill's wild thrills! The @GoldenKnights win it in OT.

Then the Sharks mounted their own comeback. Evander Kane lit the lamp 7:49 into the third period. Tomas Hertl sent it to overtime, beating Fleury with just 1:57 remaining in regulation.

Neal got the puck in transition and skated between the blue lines. He then sent a pass to Karlsson on his right. Karlsson sped up for a breakaway down the right flank.

He then smacked a wicked wrist shot, beating Jones stick-side for the game-winner.

p.s. that Smith goal? it was a pass. pic.twitter.com/vcSuXglv6s

The Golden Knights face the Sharks in Game 4 at 10 p.m. Wednesday in San Jose.