April 16 (UPI) -- A little girl was on both ends of the emotional spectrum before she finally received a puck from the Washington Capitals.

The young fan was sitting in the glass seats during the Capitals' 5-4 loss to the Columbus Blue Jackets Sunday at Capital One Arena in Washington, D.C. Columbus now has a 2-0 lead in the first round Eastern Conference series in the Stanley Cup playoffs.

During a break, Capitals right wing Brett Connolly skated near the area where the girl was sitting. Connolly put his back to the glass and softly tossed the puck over the barrier. Three children tried to reach the prize, before it was brought down by a man standing behind them. The man handed it over to a little boy who was standing next to the girl.

He snatched the puck as the girl looked on in bewilderment.

RELATED Predators' Forserg nutmegs himself and defender with crazy goal

The girl softly punched her fist on the board in frustration, before staring down in despair.

Connolly returned and tossed another puck. A man behind the children also caught that offering, before handing it to a boy on the other side of the girl.

Connolly saw the sequence unfold and tapped the glass in front of the girl in acknowledgement. He then retrieved a puck and skated back to the area for a third time.

This time he tossed the puck in the air twice, not clearing the glass on either try. His third attempt went over the barrier and into the hands of the man once again. He finally handed the puck to the girl in front of him. She smiled and jumped with glee, embracing the precious prop.

Alexander Ovechkin scored twice for the Capitals. T.J. Oshie had a goal and an assist in the loss. Jay Beagle also lit the lamp for Washington.

Game 3 of the series starts at 7:30 p.m. Tuesday at Nationwide Arena in Columbus, Ohio. 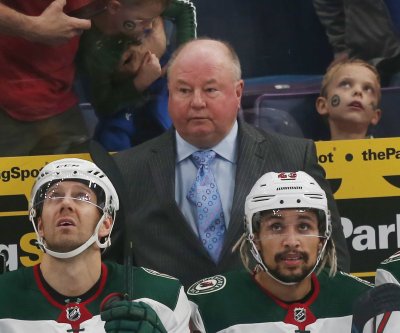