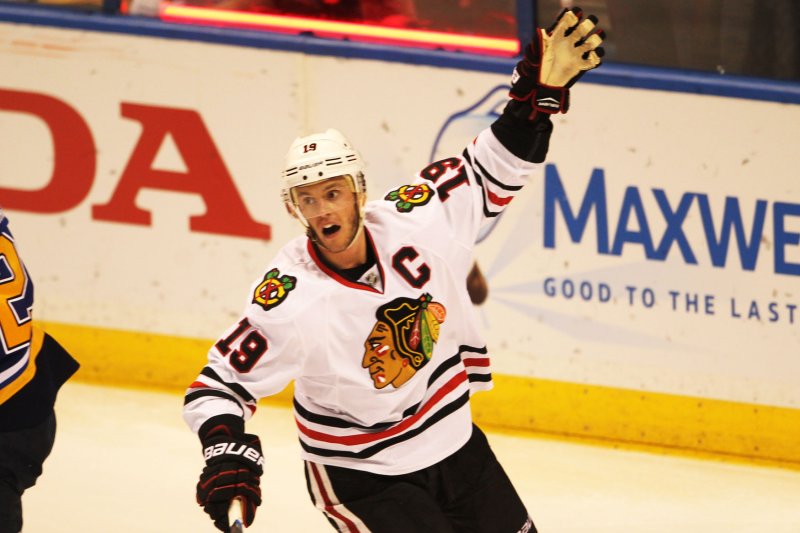 Chicago Blackhawks forward Jonathan Toews raises his arm after scoring the game-winning goal in the second overtime period against the St. Louis Blues at the Scottrade Center in St. Louis on April 21, 2016. File photo by Bill Greenblatt/UPI | License Photo

CHICAGO -- The Chicago Blackhawks will try to snap a three-game losing streak when they host the Toronto Maple Leafs on Wednesday night at the United Center.

Chicago (22-19-6) has been outscored 13-3 during its skid. The Blackhawks have lost four of their past five games, and veterans know that they need to establish a winning streak in order to climb back into playoff contention.

"We've had games this year where we've played great against top-notch teams," Blackhawks forward Patrick Kane said to the Chicago Sun-Times. "So we know it's in here. We know we can be confident, given some of the games we've had in the past."

Toronto (26-18-5) has qualified as a top-notch team at times this season, although it has struggled as of late. The Maple Leafs have only one win in their past six contests (1-2-3), which prompted coach Mike Babcock to shuffle some of his scoring lines during Tuesday's practice.

Center Nazem Kadri will pair with Mitchell Marner and Patrick Marleau as part of the effort to bolster Toronto's offense.

"We're trying to get quicker, a little more depth," Babcock told reporters before the team headed to Chicago. "That's what you try to do any time you're not winning as much as you'd like to win. ... As I went through the tape, we weren't dangerous enough in the offensive zone."

Blackhawks goaltender Jeff Glass will try to hold off the Maple Leafs as he makes his second consecutive start. Chicago has switched between Glass and Anton Forsberg with No. 1 netminder Corey Crawford sidelined by an upper-body injury. Crawford will miss his 13th consecutive game but is making progress and could return to the ice soon, according to the team.

Andersen's toughest test could come against Kane, who leads the Blackhawks with 48 points (20 goals, 28 assists) in 47 games. Jonathan Toews and Alex DeBrincat are tied for second on the team with 14 goals apiece.

Toronto is led in scoring by Auston Matthews, who has 36 points (21 goals, 15 assists) in 39 games. James van Riemsdyk ranks second on the team with 19 goals, and Marleau is third with 16 goals.

Both teams have scored more goals than they have allowed. Toronto has scored 155 goals and given up 143 goals, while Chicago has scored 139 while allowing 132.

This is the second and final meeting of the regular season. On Oct. 9 in Toronto, the Maple Leafs outlasted the Blackhawks 4-3 in overtime.