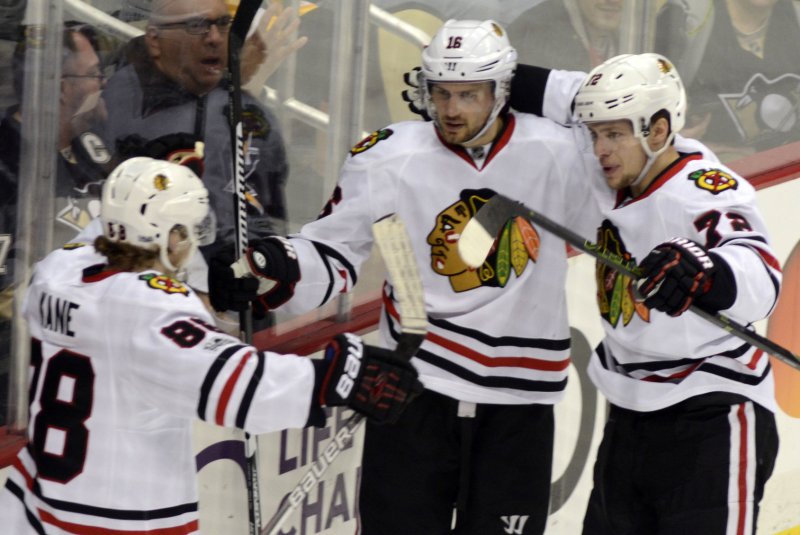 CHICAGO -- The Chicago Blackhawks' quality of play isn't where Joel Quenneville would like, but when they find ways to win games like they have lately, the coach takes it as a step in the right direction.

The Blackhawks erased a third-period deficit and Patrick Kane scored in overtime as the Blackhawks extended their winning streak to three games with a 3-2 victory over the Florida Panthers on Tuesday.

Kane scored with 2:36 remaining in overtime for Chicago, which tied the game in the third period. Corey Crawford made 35 saves to help preserve the victory for the Blackhawks, who also got a goal and an assist apiece from Brandon Saad and Jonathan Toews.

Chicago swept its three-game homestand, including a pair of overtime victories. But, with a tough stretch starting Thursday in Winnipeg against the red-hot Jets, Quenneville continues to search for improved play.

"We need to be better," Quenneville said. "And it's always us with the puck."

The Blackhawks won despite being out-shot 17-4 in the second period when Florida -- playing the second of a back-to-back following an overtime win in Detroit on Monday -- controlled the pace of play.

But Crawford kept the Blackhawks in the game until Toews drew Chicago even with 6:02 remaining. Toews took a pass from Saad and slipped a shot just inside the left post to beat Florida goalie James Reimer, who finished with 25 saves.

The Blackhawks kept up the pressure for the final six minutes but couldn't come up with the game-winner until Kane tallied his 11th goal of the season.

"You want to lead (in) games," Saad said. "But for us to be able to battle back, whatever time in the game it is, it shows a lot of character for us to stick with the game, doing the right things, and the pucks will go in for us."

Florida took a 2-1 lead less four minutes into the third period. The Panthers took advantage of a Chicago turnover and translated it into a 2-on-1, which Jamie McGinn finished off when he took a pass from Vincent Trocheck and fired a shot just under the crossbar.

After Saad scored in the first for Chicago, the Panthers drew even at the 11:12 mark of the second period on a breakaway goal by Nick Bjugstad, who broke free and drew Crawford out of position.

Despite playing on short rest, the Panthers gave Chicago everything it could handle.

"I thought it was a gutsy effort on our part," Florida coach Bob Boughner said. "I thought that we got contributions from the lineup. We all played hard. We played 60 minutes. You know back-to-back is never easy, especially against a team like this."

After the Blackhawks rallied in the third period, the Panthers couldn't respond and had to settle for taking a point in the overtime loss.

"I don't think you can be satisfied when you don't win the game," McGinn said. "We played well enough to win and come out of here with two points. ... It's disappointing, but we'll take the positives."

That's what the Blackhawks will do as they continue to attempt to find their footing. But, after finding creative ways to win their last three games, Toews and his teammates will build off what they were able to accomplish in making critical plays when needed.

"Those three games are must-win games, so it was nice to play well late and find ways to win games maybe if we don't play our best hockey, especially in the (second) period," Toews said. "I think it gives us confidence that we can find some ways to score late goals, take the lead and come back and down a goal late and win in overtime."

NOTES: Panthers G James Reimer finished his first back-to-back with a start in net Tuesday. Reimer, who allowed just one goal in an overtime victory against Detroit on Monday, got the nod over Harri Sateri as Roberto Luongo remains sidelined with an upper-body injury. ... Florida D Ian McCoshen, RW Radim Vrbata and LW Dryden Hunt were scratched. ... Blackhawks LW Patrick Sharp played his 900th career game. ... RW Richard Panik did not play for the first time this season and was a healthy scratch. Panik, who has not scored in 21 games dating to Oct. 21, did not skate with the line rushes at Tuesday's morning skate. Panik was replaced by Ryan Hartman, who had been a healthy scratch the last three games. ... D Cody Franson did not play and remains day-to-day with an upper-body injury. Jordan Oesterle started in Franson's absence and was paired with Duncan Keith.