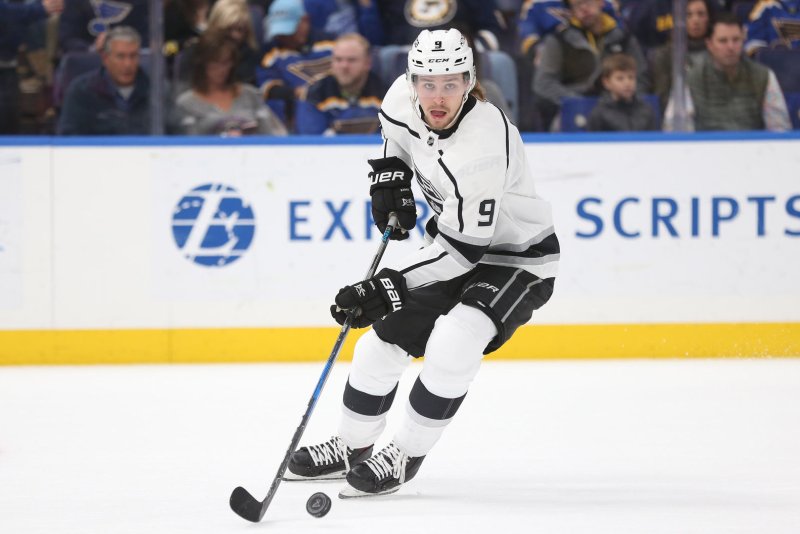 Los Angeles Kings' Adrian Kempe brings the puck up ice against the St. Louis Blues in the first period at the Scottrade Center Friday in St. Louis. Photo by Bill Greenblatt/UPI | License Photo

St. Louis Blues Jaden Schwartz stretches at the bench during warmups before a game against the Los Angeles Kings at the Scottrade Center Friday in St. Louis. Photo by Bill Greenblatt/UPI | License Photo

ST. LOUIS -- Serving as the backup goalie to Jonathan Quick, Darcy Kuemper knows he is going to get only limited opportunities to play for the Los Angeles Kings.

That's why he tries to make the most of his chances when they come, and he did just that on Friday night against the St. Louis Blues.

Kuemper, making his sixth start of the season, stopped 39 of 40 shots and raised his record to 4-0-2 as the Kings won their fourth game in a row, a 4-1 victory.

"I was excited to get the opportunity to play against St. Louis," Kuemper said. "You don't always get those opportunities so I was excited when I found about it and I think our whole team was and really got up for it and wanted to prove something out there."

Tyler Toffoli scored twice, including the first goal of the game just 1:43 into the first period, to help the Kings get off to a fast start. Anze Kopitar also scored in the first period as the Kings took a 2-0 lead despite giving up 20 shots in the period.

"A lot of them were from the outside and not a lot of second opportunities which as a goalie, we love," Kuemper said. "It took the entire roster and it's going to every time you play a good team like St. Louis but we really brought it tonight and got rewarded with the result."

The Blues' only goal came on a power-play by Patrik Berglund, playing just his second game since coming off injured reserve, in the second period on a redirected pass.

That goal brought the Blues within 2-1, but Adrian Kempe restored the two-goal lead with a goal with 1:04 left in the second period and Toffoli then finished off the win with his 13th goal of the season, his third game of the year with two goals.

He said one of the keys to the win was getting off to the quick start.

"We know how it feels when you kind of get into a hole early in games," Toffoli said. "We did a good job of doing that and we were ready to play tonight."

Mike Yeo could not say the same about his team, which fell out of first place in the Central Division for the first time this season.

"We've lost a couple of games in a row before but I would say this is the first time this year I would say where we weren't right," the Blues' coach said. "We weren't right to start the game and certainly we didn't find it along the way.

"The way we're going right now we're not giving ourselves a chance to win hockey games."

The Blues also started their backup goalie, Carter Hutton, and he allowed three goals on 21 shots before he was replaced by Jake Allen for the third period.

Hutton can appreciate Kuemper's position with the Kings.

"I thought he did a good job of eating up pucks and everything," Hutton said. "We're going to have to work out way out of it. It's just been a bump in the road."

The Blues finished just 2-3 during a five-game homestand.

"We've got to get back to supporting each other a lot better and being a lot closer to the puck every time instead of being too spread out," said Paul Stastny.

It's the exact opposite of the way things are going of late for the Kings, who completed back-to-back road wins 24 hours apart following a 5-2 win in Washington on Thursday night.

"It was back to back against two really good teams that play hard and play heavy games," said Kings coach John Stevens. "I thought the guys really dug in tonight. Got a great performance from your goaltender and we had some real quality looks. We continued to get better as the game wore on. I thought we got good contributions from everybody."

NOTES: After being a healthy scratch for the previous four games, D Carl Gunnarsson returned to the Blues' lineup in place of Robert Bortuzzo. ... C Oscar Sundqvist also returned in place of RW Sammy Blais, with Patrick Berglund shifting from center to left wing. ... The Kings said C Torrey Mitchell, who missed his fourth consecutive game since being acquired from Montreal on Nov. 23, had obtained his work visa and will meet the team in Chicago before Sunday's game in Chicago. ... The Blues will play the Wild Saturday night in Minnesota.