Tampa Bay Lightning to retire No. 4 of Vincent Lecavalier 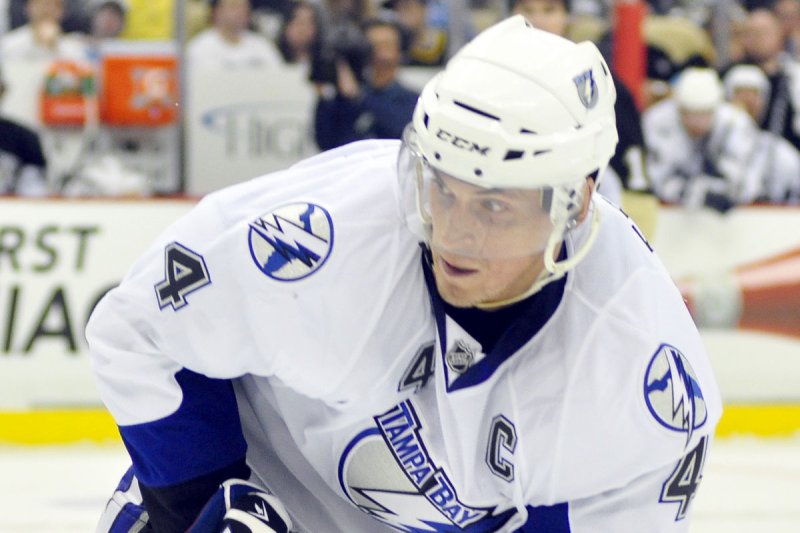 Tampa Bay Lightning captain Vincent Lecavalier looks for the puck during the first period of the Pittsburgh Penguins 3-0 win at game one of the Eastern Conference quarter final playoff series at Consol Energy Center in Pittsburgh, PA on April 13, 2011. File photo by Archie Carpenter/UPI | License Photo

Vincent Lecavalier will become the second player in Tampa Bay Lightning history to have his number retired, the team announced on Monday.

The Lightning will retire Lecavalier's No. 4 in a ceremony prior to the team's home game against the Los Angeles Kings on Feb. 10, 2018.

Lecavalier is the franchise's all-time leading goal scorer (383) and spent 14 years with the team. The Quebec native was named the club's captain in his second season, with the then-19-year-old becoming the youngest to wear the "C" in NHL history at the time.

"It is a great honor to have my number retired and I'd like to thank the Lightning organization and (chairman) Jeff Vinik for recognizing me with this achievement," the 37-year-old Lecavalier said in a team release. "The Tampa Bay community and our fans have treated me and my family so amazingly that this honor is extra special to share it with everyone. My family and I are very excited for Feb. 10 when we can share so many memories."

Lecavalier, who joins Martin St. Louis as the lone members of the Lightning to have their numbers retired, collected 874 points over his 1,037 games with Tampa Bay.

"We are thrilled to retire another one of our franchise's great players, and it's extra special since this year we will be celebrating our 25th anniversary," Vinik said.

"Vinny was a tremendous player during his 14 years with the team and a true ambassador and hero for many people in Tampa Bay for his tireless work in the community."

Lecavalier helped the Lightning to the Stanley Cup in 2004. His best season was the 2006-07 campaign, when he won the Maurice "Rocket" Richard Trophy as the NHL's top goal scorer in a season in which he had 52 goals and 108 points for the Lightning.

The four-time All-Star retired in June 2016 after 17 seasons in the NHL, recording 421 goals and 949 points in 1,212 career games with the Philadelphia Flyers, Kings and Lightning.

Lecavalier was the No. 1 overall pick by Tampa Bay in the 1998 NHL draft.

NHL // 2 weeks ago
Stanley Cup Final: Kadri OT winner leads Avs over Lightning for 3-1 lead
June 23 (UPI) -- Center Nazem Kadri scored 12:02 into overtime to lead the Colorado Avalanche to a narrow win over the Tampa Bay Lightning in Game 4 of the 2022 Stanley Cup Final. The Avalanche are one win from the NHL title.

NHL // 3 weeks ago
NHL won't allow Stanley Cup trips to Russia, Belarus
June 16 (UPI) -- The winners of this year's Stanley Cup Final will not be allowed to bring the trophy to Russia or Belarus due to the war in Ukraine, NHL deputy commissioner Bill Daly said at a news conference.
Advertisement