Who can prevent a Pittsburgh Penguins three-peat in 2018?

By
Randy Sportak, The Sports Xchange 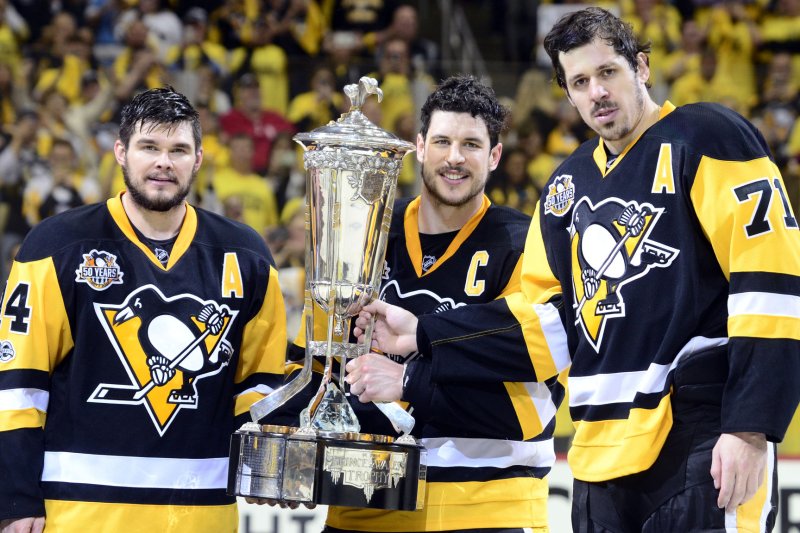 A repeat Stanley Cup champion for the first time since the Detroit Red Wings accomplished the feat in 1997 and 1998.

Can the Pittsburgh Penguins, owners of back-to-back titles after vanquishing the Nashville Predators in the Stanley Cup Final, make it a three-peat in 2018?

It's certainly possible, even if the Penguins lose goalie Marc-Andre Fleury either via trade or the upcoming expansion draft.

When the curtain lifts on the 2017-18 season, Pittsburgh will ice a potent team, especially at forward with Sidney Crosby and Evgeni Malkin leading the way, provided they can retain enough of their possible free agent defensemen.

Retaining the free agents while getting a return to health from Kris Letang would enhance Pittsburgh's chances at a sixth Stanley Cup. The Penguins won their latest Stanley Cup while Letang recovered from neck surgery.

However, there are plenty of other squads capable of wrestling away the crown a year from now.

While images of champagne being sipped are fresh in everyone's mind, and without the knowledge of what will transpire when the expansion Vegas Golden Knights begin building their team and the NHL Draft is held later this month, here is a look at the other favorites to hoist hockey's Holy Grail next spring.

Nashville Predators: Yes, the runners-up grabbed the 16th and final playoff berth, but going into the season, the Predators were pegged by many to be a Cup contender. The two key players needing new contracts are pending RFA Ryan Johansen and pending UFA Mike Fisher. It would be a surprise if both weren't back to skate on a team built around an excellent defense corps (don't be shocked if the Predators opt to protect four blue-liners in the expansion draft and therefore only four forwards instead of seven forwards and three defensemen).

Washington Capitals: Another great regular season and another early playoff exit. Sure, it's easy to dismiss the Capitals as perennial flops with no hope of ever winning the Stanley Cup, but that's as nonsensical as their repeated failings. True, the Caps will take a big hit if both pending UFA defensemen Kevin Shattenkirk and Karl Alzer depart -- it's pretty much certain one of them will be gone. Washington may lose a couple of key forwards in UFAs Justin Williams and T.J. Oshie, but this is still a strong team up front, led by Alex Ovechkin and Nicklas Backstrom, and in the back with goalie Braden Holtby.

Chicago Blackhawks: Let's get the bad news out of the way -- The Blackhawks currently sit roughly $4.5 million over the salary cap for next season. Therefore, they must move a core piece (defensemen Brent Seabrook and Niklas Hjalmarsson and forward Artem Anisimov are candidates). However, once they get out of salary-cap jail, the Blackhawks will again be a contender. Don't be fooled by the opening-round four-game sweep at the hands of the Predators. Although Chicago got bounced in the first round for the second consecutive year, a team with Jonathan Toews and Patrick Kane in their prime years is poised for another run.

Anaheim Ducks: The West Coast version of the Capitals (five straight division titles without even a single trip to the Stanley Cup Final) can't be dismissed too easily. Granted, the Ducks will either lose an important defenseman in the pending expansion draft or pay a price to keep all of Hampus Lindholm, Sami Vatanen, Cam Fowler, Kevin Bieksa and Josh Manson, but what will remain down the street from Disneyland is a strong squad in all areas. One concern is that core forwards Ryan Getzlaf and Corey Perry just turned 32 years old and Ryan Kesler will be 33 before the season kicks off.

Edmonton Oilers: The forward duo of Connor McDavid and Leon Draisaitl receive the most attention, but the Oilers -- who took Anaheim to seven games in the second round -- have a well-built team with a skyrocketing trajectory. Not only do they have a strong crop of forwards and a solid goalie in Cam Talbot, but the defense has a trio in Adam Larsson, Oscar Klefbom and Darnell Nurse all poised to reach a new level. The key offseason moves as it stands now are to re-sign RFA Draisaitl and try to keep UFA defenseman Kris Russell in the fold.

New York Rangers: Goalie Henrik Lundqvist had the worst season of his NHL career. That's either an off year or a sign the 35-year-old standout is on a downward slide. We'll guess it's the former and Lundqvist will bounce back. Considering the Rangers are coming off a third consecutive 100-point campaign, all their key forwards save for Rick Nash are on the right side of 30 years old and their defense corps is filled with talent and experience, it's a good bet they will be in the hunt again next season.