Pittsburgh Penguins right wing Patric Hornqvist celebrates the second of two goals in the second period against Nashville Predators at the PPG Paints Arena in Pittsburgh on January 31, 2017. The teams will face off in the Stanley Cup Finals, which begin on Monday night. File photo by Archie Carpenter/UPI | License Photo

With a defending champion on one side and a de facto 16th seed on the other side, this year's Stanley Cup Final promises to be one of the most fascinating in a long time.

Shooting to become the first back-to-back Cup champs since the 1997-98 Detroit Red Wings, the Pittsburgh Penguins will host the Nashville Predators on Monday night in Game 1. Great storylines abound both ways, which could lead to an entertaining series.

Here are 10 things to watch during the course of the series:

Pittsburgh Penguins left wing Chris Kunitz (14) (l) joins Pittsburgh Penguins center Sidney Crosby (87) (center) and Pittsburgh Penguins center Evgeni Malkin (71) as they pose with the Prince of Wales Trophy after the 3-2 double overtime victory against the Ottawa Senators of game seven to win the Eastern Conference Finals of the Stanley Cup Playoffs at PPG Paints Arena in Pittsburgh on May 25, 2017. Photo by Archie Carpenter/UPI
1. CENTER ICE: Here is where Pittsburgh should have a big advantage. Sidney Crosby and Evgeni Malkin are arguably the top 1-2 center duo anywhere, and Nashville is playing without its top pivot after Ryan Johansen underwent emergency thigh surgery following Game 4 of the Western Conference Finals.
Advertisement

Short term, the Predators managed to thrive against the Anaheim Ducks in the conference finals despite the loss of Johansen. Colton Sissons potted a hat trick in the clincher against Anaheim while matching up well physically with Ryan Getzlaf. But even in a short sample size, can he be expected to match or exceed Crosby or Malkin?

Help does appear to be on the way for Nashville, as captain Mike Fisher is likely to rejoin the lineup for Game 1 in Pittsburgh after sitting out the final two games of the Anaheim series.

Nashville Predators goaltender Pekka Rinne keeps an eye on a puck that eventually gos into the goal in the third period against the St. Louis Blues at the Scottrade Center in St. Louis on April 28, 2017. St. Louis defeated Nashville 3-2. Photo by BIll Greenblatt/UPI
2. NET GAINS: There's a school of thought that suggests Predators goalie Pekka Rinne is the Conn Smythe Trophy favorite, even if the Penguins win this series.

After all, Rinne has played the best hockey of a good career this postseason, registering a 1.70 goals-against average and a .941 save percentage in 16 games. Those marks are top five in NHL playoff history.

But there's a chance Rinne might not be the best goalie on the ice in this series if Pittsburgh's Matt Murray is playing up to form. Murray posted a .930 save percentage in last spring's run to the Cup title, and was close to the top of his game after taking over for Marc-Andre Fleury following Game 3 of the Eastern Conference finals.

If Rinne or Murray can steal a game in the Cup Finals, it could make all the difference. 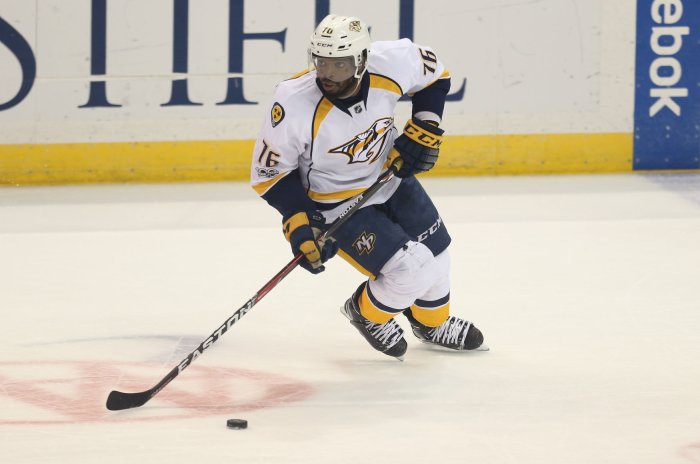 Nashville Predators P.K. Subban brings the puck up ice in the second period against the St. Louis Blues at the Scottrade Center in St. Louis on April 28, 2017. Photo by BIll Greenblatt/UPI
3. BIG-NAME DEFENSE: It took about half a season to figure things out, but Nashville has hit on a winning combination for its defensive corps.

Coach Peter Laviolette tried P.K. Subban, acquired from Montreal on June 29 in the off-season's biggest trade, with Roman Josi on the first pairing. It didn't work, so Plan B was to pair Subban with Mattias Ekholm and Josi with Ryan Ellis.

After a spate of injuries forced pairings to be juggled, the Predators settled on that foursome when Josi returned from a concussion in early February. The Big Four has starred at every turn, providing key goals and helping limit high-danger chances in front of Rinne.

Ekholm and Subban have been death on opposing top lines, shutting down Patrick Kane and Jonathan Toews in the Chicago series, keeping Vladimir Tarasenko in check during the St. Louis series and quashing Getzlaf's line in the Anaheim series. Playing against either Crosby or Malkin could be their greatest challenge yet.

"The numbers and eyeball all pointed to Roman and Ryan being a terrific pair," Laviolette said. "Ekholm and Subban are a really, really big, strong, tough pair to play against. We really haven't changed from that in probably five months, six months."

Hainsey, Dumoulin, Schultz, Cole, Maatta, Daley. Most of these guys were cast off by other organizations for one reason or another. Brought together by circumstance and others' misfortunes -- No. 1 defenseman Kris Letang (neck) has missed the entire playoff run -- this group has managed to hold the fort.

Ron Hainsey, acquired from Carolina at the trading deadline to add depth, has joined Brian Dumoulin on the top pairing. Olli Maatta and Trevor Daley, along with Ian Cole and Justin Schultz, form the other pairings. None of them will remind you of Nashville's Big Four, but all have played well enough to get Pittsburgh back to this point.

Nashville Predators Filip Forsberg takes a skate to the chest from St. Louis Blues Jay Bouwmeester in the first period at the Scottrade Center in St. Louis on April 2, 2017. Photo by Bill Greenblatt/UPI
5. WEAKNESS VS. WEAKNESS? If the matchup of Penguins forwards vs. Nashville defense is strength against strength, the clash of Predators forwards and Pittsburgh defense could be classified as weakness vs. weakness, relatively speaking.

That doesn't mean that it is less important. Far from it. In fact, one can make the case that what happens when Nashville possesses the puck will determine whether the Cup stays in Pennsylvania or acquires a Tennessee twang for the first time.

Wingers Filip Forsberg and Viktor Arvidsson are still capable of driving play even without Johansen, and the Predators have another sniper who's under the radar at the moment in James Neal. His overtime goal in Game 1 of the Western Conference Finals set the tone for that series.

Nashville Predators James Neal yells out as he skates to join teammates after scoring a goal against the St. Louis Blues in the first period at the Scottrade Center in St. Louis on April 28, 2017. Photo by BIll Greenblatt/UPI
6. TRADING PLACES: Three years ago, the teams made a trade during the NHL draft. Neal left the Penguins and Patric Hornqvist departed Nashville, and now the duo match scoring touches on the sport's biggest stage.

"I've never met a player like him," Penguins general manager Jim Rutherford said of Hornqvist. "We could lose 10 in a row, and he'd be in the locker room as if we'd won 10 in a row. He keeps things going in there."

Hornqvist, who has missed the past six games with what is believed to be a hand injury, although officially labeled an upper-body injury, practiced on Sunday and could return for Game 1. His return would boost the Penguins in a similar fashion to Fisher rejoining the Predators.

St. Louis Blues Paul Stastny and Nashville Predators Ryan Johansen get their sticks up in the third period at the Scottrade Center in St. Louis on December 30, 2016. Nashville defeated St. Louis 4-0. Photo by Bill Greenblatt/UPI
7. STAR-SPANGLED COACHES: This series represents a first in Cup annals. Laviolette and Pittsburgh bench boss Mike Sullivan were both born in the United States. Every other final has featured one or two coaches born in Canada.

"They're passionate coaches, great motivators," Rutherford said of Laviolette and Sullivan. "They play an up-tempo game. The way Peter has his team play is what I saw in what Sully does."

Both have won Cup titles, and Laviolette is one of only four coaches to take three different franchises to the Cup Finals. He guided Carolina to the 2006 Cup title in a seven-game thriller against Edmonton and coached Philadelphia when it fell to Chicago in six games in 2010.

8. BEHIND THE NET: Every team will use the hard-around, that is, shooting the puck around the net from one side of the ice or the other, as a way to gain the offensive zone.

That strategy has backfired repeatedly on Predators opponents in the postseason. Rinne, always a willing puck-handler who at times has made some errors in judgment, has been like a third defenseman this postseason. He has been able to stop the puck behind the net and start a breakout sequence with a pass to a defenseman.

Rinne also has picked up three assists in the playoffs, most notably in Game 2 of the Chicago series when he started a passing sequence that led to Harry Zolnierczyk's goal and a 2-0 second-period lead that helped shape the game's remainder.

"He's very good at knocking them down," Laviolette said of Rinne's work stopping pucks behind the goal. "You see how he does it. When he goes back there, he uses his whole body and he can get a piece of it."

9. GETTING OFF THE MARK: One reason that Nashville has reached this point is its ability to get going early in a series. It has won Game 1 on the road in all three series, seizing home-ice advantage and then using the loud, wild environment at Bridgestone Arena to its advantage.

The Predators are 7-1 at home in the playoffs, losing only Game 4 of the conference finals on a fluky Corey Perry goal that hit off Subban at the goalmouth. After that loss, Nashville bounced back and won Game 5 in Anaheim to set the stage for its clincher in Game 6.

The Penguins have also won two of their three Game 1s, the exception occurring in their conference final when Ottawa's Bobby Ryan knocked them off with an overtime goal.

10. NO BULLIES HERE: If Crosby and other Pittsburgh players were breathing a sigh of relief when the Predators eliminated Anaheim, there's a good reason: They probably won't have to worry about overtly physical play.

Johansen criticized the Ducks' Ryan Kesler after Game 2 of the conference finals, saying he was having to pull a stick out of his groin every shift. Other incidents -- such as Perry's butt-ending of Rinne in Game 4 -- might have left one with the impression that Anaheim could have changed its nickname from the Ducks to the Really Rottens.

It would be surprising if this series took that kind of ugly twist. Sure, both teams have players who don't mind the crunching checks or even dropping the gloves on occasion. But their identity revolves around speed and puck possession.

That should make this the kind of matchup the NHL was hoping for, made more alluring by the prospect of a defending champion being challenged by an appealing underdog.