By
Heather Engel, The Sports Xchange

MONTREAL -- Fourth-line winger Tanner Glass spent most the season in the minors, earning a late season call-up to the New York Rangers. And in their opening game of 2017 Stanley Cup Playoffs, he came through.

Glass' first-period goal helped the Rangers earn a 2-0 win over the Montreal Canadiens on Wednesday night at the Bell Centre in Game 1 of an Eastern Conference quarterfinal playoff series.

"He scored a big goal," Rangers coach Alain Vigneault said. "He's an honest player, he's a guy that knows the game and gives it his all. That's what we were expecting from him tonight. We expected him to work hard, and that's what he did."

Michael Grabner added a late empty-net goal for New York, which got 31 saves from Henrik Lundqvist.

Montreal dictated the pace early on, controlling the puck and spending much of the first half of the opening frame in the Rangers' end.

New York nearly struck early in the period when Chris Kreider skated toward a loose puck for a potential breakaway. But Price reached the disc first and cleared it out of harm's way, avoiding a repeat of the collision between the two in their last playoff matchup.

But it was the Rangers who got on the board first. After Tomas Plekanec won the faceoff for the Canadiens, Glass got his stick on the puck in the right circle and lifted a backhander past Price at 9:50 of the first period.

"I was thinking pass to the point but I had a second there and I just wanted to get it up and lucky it went in," he explained.

"He got a lot of wood on it, it was a pretty good shot," said Canadiens goaltender Carey Price, who stopped 29 shots. "Didn't really think at the time it was going to be the difference. You've got to give that team credit; they played pretty well, and I thought Hank played outstanding."

Momentum shifted in New York's favor over the next few minutes, but fell back into Montreal's hands with a pair of back-to-back penalties against the Rangers.

"Coming into a tough building like this, it's going to be a tough first period, which it was for us," said Glass. "They came really hard and the crowd is going, so to get that first one and get through the first period up one was big for us, and I think we got our legs going in the second.

After getting outshot 16-5 in the first, the Rangers were ready to in the second, putting up seven shots before the Canadiens managed one.

"There were some chances there to score goals but at the other end of it, I think there were a couple of chances where we got pucks to the net and the rebounds were sitting there," Canadiens captain Max Pacioretty said. "We've got to dig a little bit deeper to come up with those second chances."

Brady Skjei nearly doubled the Rangers' lead early in the second when his shot hit the post and later, Oscar Lindberg had a chance to do the same when he intercepted Price's clearing attempt from behind the net but the Canadiens netminder made it to his cage just in time to deny him.

Montreal had one of its best opportunities later in the frame on the power play. Andrew Shaw hit the post and then, moments later, defenseman Shea Weber snuck into the right circle for an attempt but was robbed by Lundqvist.

"I've been saying all along he's a big-game goalie, he likes the competition and likes when games are tight," Glass said. "As long as we're picking up our guys in front of him and letting him see that puck, we have the utmost confidence in him."

Grabner sealed the game with 1:10 remaining as the Habs were pushing for the equalizer. 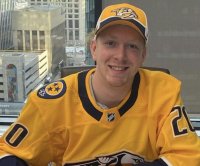 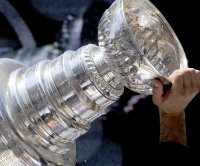