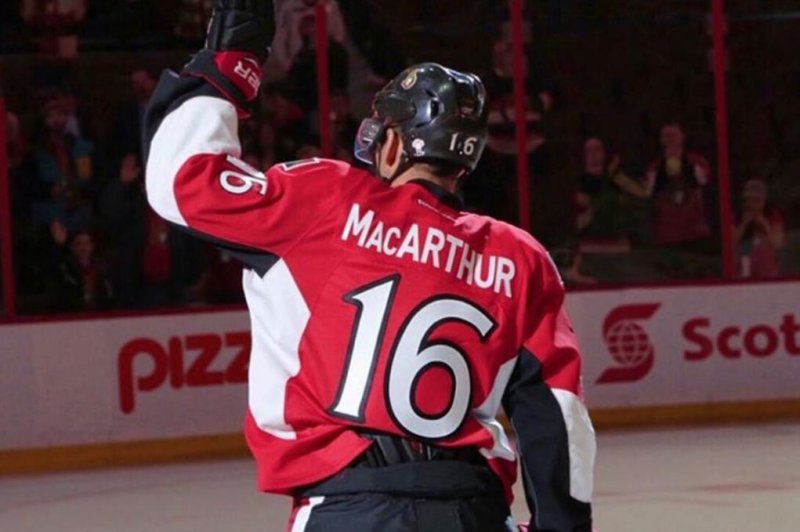 Ottawa Senators forward Clarke MacArthur waves to the fans after returning for its Tuesday game against the Detroit Red Wings at the Canadian Tire Centre in Ottawa. Photo courtesy of (Senators/Instagram)

April 5 (UPI) -- Clarke MacArthur hasn't played hockey with his teammates in 16 months. That emotion came out in his post-game interview.

The Ottawa Senators forward played 9:44 minutes Tuesday in his return from a post-concussion syndrome absence. It was his first game since Oct. 14, 2015.

Clarke MacArthur after returning to the lineup tonight for the first time since 2015. So much emotion. pic.twitter.com/vinVrZUaUP

"What an awesome feeling looking down to bench and seeing Clarke back playing," Senators right wing Mark Stone tweeted. "One of the best people I've met playing hockey.."

In his post-game interview, MacArthur let the tears flow when asked about getting back to the frozen floor.

"To get the chance to play again, it's a great feeling," said MacArthur, who was named third star for the game. "It's been two years of never knowing if you are going to get back or what's going to happen, so, just happy to be back playing."'

"Everyone is excited," MacArthur told the Ottawa Citizen. "Everyone has seen what has gone on in the past couple of years. It's just great to be back, to be back playing. I wanted to play and the hurdles to get over everything and our staff and the whole medical thing...a delicate situation that you have to cross all the T's. I was very thankful for the organization to give me another chance again."

The 31-year-old is playing in his 11th career season. He has 41 career goals and 38 assists for the Buffalo Sabers, Atlanta Thrashers, Toronto Maple Leafs and Senators.