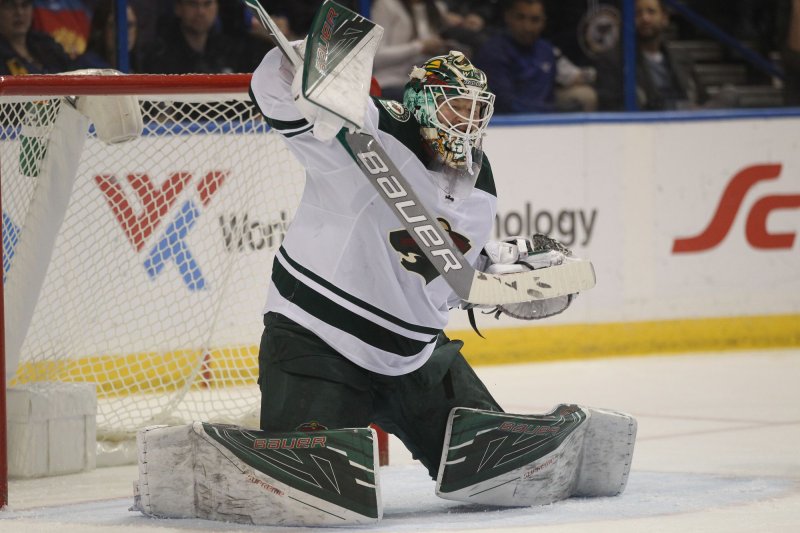 SAINT PAUL, Minn. -- The Minnesota Wild will be back home next week for the playoffs, but they gave their fans one last regular-season reason to smile Tuesday, beating the Carolina Hurricanes 5-3 and clinching home ice in the first round of the playoffs.

"We love playing here, especially in the postseason," Parise said after his team improved to 27-12-2 at Xcel Energy Center. "We've talked about it before a lot, how alive this building becomes and how great it is for our team to play home playoff games, and now we get the opportunity to start here. So hopefully we're able to take advantage of that."

The Hurricanes were eliminated from playoff contention with the loss, which came despite Ward making 31 saves and keeping the Hurricanes in the game while taking heavy fire.

Jeff Skinner had two goals for Carolina (35-30-14), while Lee Stempniak had a goal and an assist, but the Hurricanes lost their third game in a row. Their last trip to the playoffs was in 2009, when they fell to Pittsburgh in the Eastern Conference Finals.

"We didn't talk about it," Hurricanes coach Bill Peters said of his team's official exit from the playoff race. "We're going to finish hard here. We've got three (games) left ... so we're going to do it right. We've done it right for a long period of time here recently and we want to finish on a positive not with our effort and our attention to detail."

After a rocky opening 20 minutes, Dubnyk settled down to make 27 saves for the Wild, who will make their fifth consecutive trip to the playoffs and open a series at home for the third time in franchise history. Niederreiter's second goal of the game came with 5:42 to play, giving the Wild some insurance.

"I've had home ice every year I've ever been in the league and I haven't won a Cup yet, so I don't know how important it is," Minnesota coach Bruce Boudreau said. "I certainly am glad we have it. We have tremendous fans and hopefully they can make the difference."

Minnesota played one of its most dominant periods of the season in the first, outshooting Carolina 16-6 and scoring three goals.

But the Wild emerged without a lead to show for their efforts. Dubnyk, who struggled so notably in March that Minnesota gave farmhand Alex Stalock two starts last week, allowed goals on half the shots he faced in the period as Carolina had an answer for Minnesota's offense.

"Definitely a weird start. Seems to be a few of those the last month," Dubnyk said. "The good news was we were tied and we had a great period, just a couple mistakes that ended up in chances and that was really it.

While Parise and Niederreiter each had a goal and an assist for Minnesota, which led 1-0, 2-1 and 3-2, Carolina responded each time, with Skinner setting up Stempniak to get the Hurricanes on the board, then scoring the next two himself.

Minnesota took a 4-3 lead in the middle period when Coyle scored on the rebound of a Christian Folin shot.

The Wild nearly took a two-goal lead but were thwarted when Ward spun around and gloved a fluttering puck that was behind him and appeared headed for the back of the net.

"Ward played great for us and made some big stops," said Skinner, whose 35 goals are a career high. "They could've had a few more, especially in the first. He made some big saves."

NOTES: Before the game, the Wild wore throwback Minnesota North Stars replica sweaters to commemorate the NHL's arrival in Minnesota 50 years ago, and Wild LW Zach Parise warmed up wearing a helmet and gloves that his late father, J.P., used in the 1970s when the elder Parise skated for the North Stars. ... Tuesday's game marked the NHL debut of Hurricanes RW Andrew Poturalski. The former University of New Hampshire standout skated on the fourth line for Carolina, with Bryan Bickell at center. ... Both teams honored Wild C Eric Staal before the game, commemorating his recently completed 1,000th NHL game. Staal, who spent parts of a dozen seasons with the Hurricanes, was joined on the ice by his parents, his wife and children, and his brother Jordan, who plays center for Carolina.