By
Ross McKeon, The Sports Xchange

The St. Louis Blues beat the San Jose Sharks 4-1 on Thursday to sweep the season series in a rematch of their Western Conference Finals matchup. File Photo by Bill Greenblatt/UPI | License Photo

SAN JOSE, Calif. -- When the St. Louis Blues play the second night of a back-to-back, they're simply at their best.

The Blues beat the Sharks 4-1 on Thursday to sweep the season series in a rematch of their Western Conference Finals matchup. They won for a seventh straight time when playing the second night. Six of those victories have come on the road.

"Really, it shows the competitive nature of our group, and I thought that we competed at a real high level tonight," St. Louis coach Mike Yeo said. "Right from the drop of the puck, guys were paying a price for each other."

San Jose was held to a season-low 20 shots on goal for a fourth time as one-time Sharks farmhand Carter Hutton backstopped the desperate Blues to a sixth win in seven games.

"The execution wasn't quite there," Sharks captain Joe Pavelski said. "We weren't heavy enough on a few battles. At the end of the night, that will cost you."

The hosts' two-game winning streak was snapped, and they remained seven points ahead of division rival and idle Anaheim, whom the Sharks host on Saturday to close the season-high six-game homestand.

"We've got one more big game here before we head out on the road, and we'll need to play our game," Pavelski said.

St. Louis didn't earn its first power play until midway through the final period, but it needed only 11 seconds to convert a Dylan DeMelo tripping penalty.

Tarasenko scored his second of the game, and team-leading 34th of the season, into an empty net at 18:10.

"It's kind of how the whole game went for us," Dell said. "The third one went off of Braun. The bounce on the empty-netter was right off (Brent) Burn's foot and right to them. It was the story of the night."

St. Louis was airtight in its zone all night.

"Guys were paying a price, blocking a lot of shots," Yeo said. "I thought we defended hard, but I felt like we were defending a little more than we would have liked. I felt that, especially once the start of the second period came on, we started to get on the attack more."

The Blues scored the only goal of the second period to take a 2-1 lead into the final 40 minutes.

Defenseman Jay Bouwmeester missed the net with a drive from the right circle, but the hard carom off the end boards went to an unmarked Zach Sanford, who banged home his third goal from the weak side at 5:49.

"I saw it coming the whole way," Sanford said. "I didn't know if it was ever going to make it to me. It slowed up a little there at the end, but it ended up getting there in time."

The Sharks struggled to produce anything in terms of offensive pressure in the middle period. They managed five shots on goal -- three of which came during 5-on-4 skating -- for a meager two-period total of 11.

"If we got a shot, they probably got to it a little quicker," Pavelski said. "It was often one and one. We probably weren't on the inside enough. It's hard to say. We'll look at the video, but obviously that's not us. We're a lot better than that."

Scottie Upshall picked off a cross-ice clear by Burns at center, entered the zone and cranked off a low drive from above the right circle that beat a screened Dell at 16:40. It was the Blues winger's eighth goal.

The Sharks struck back at 17:45 when defenseman Marc-Edouard Vlasic's drive from the left point caromed off the skate of St. Louis rear guard Carl Gunnarsson and past Hutton. It was Vlasic's fifth goal of the season and second since Nov. 12.

"They came out hard. I knew they were going to be pretty desperate," Dell said. "I don't think we matched their desperation level tonight. Seeing that level of intensity from a team that is really pushing is something I can really learn from."

-- The Blues blocked 21 shots in addition to holding the Sharks to just 20.

-- D David Schlemko missed a seventh straight game and F Melker Karlsson was out for a third straight for San Jose. Both are nursing lower-body injuries.

-- The Blues continue their five-game trip with a stop at Arizona on Saturday.

-- The Sharks conclude a season-high six-game homestand Saturday against Anaheim.

NHL // 5 days ago
Jeremy Roenick 'angry' and 'disappointed' after being fired by NBC Sports
Feb. 12 (UPI) -- NHL broadcaster Jeremy Roenick, who was suspended by NBC Sports in December for making inappropriate comments about his co-workers during a podcast, won't return to the network. 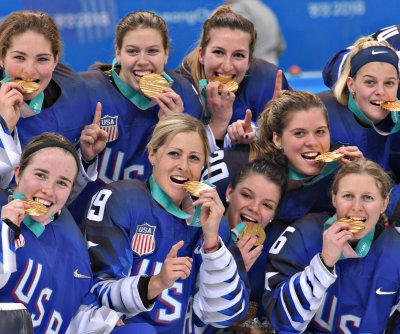