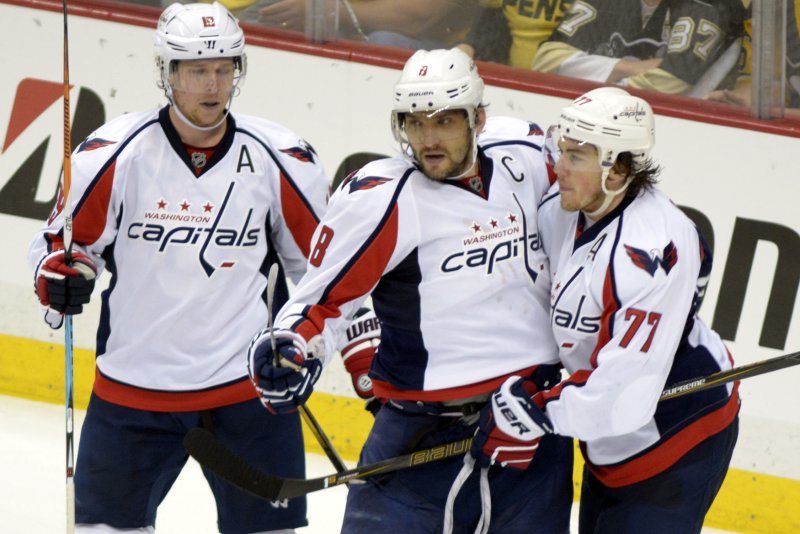 March 5 (UPI) -- WASHINGTON -- On a night when the penalty killers were dominant for the Washington Capitals and Philadelphia Flyers, the Capitals' power play was the one that finally broke through.

Nicklas Backstrom scored a power-play goal with 1:35 left in overtime and the Capitals defeated the Flyers 2-1 on Saturday night, extending their franchise-record home winning streak to 15 games.

With Michael Del Zotto off for holding, Backstrom took a pass from Kevin Shattenkirk and wristed a shot past Steve Mason from the right circle on Washington's fourth try with the man advantage.

"(T.J. Oshie) was in a great position in front, good screen," Backstrom said, "so just trying to shoot short side there."

Moments earlier Mason, who finished with 22 saves, had sprawled across the crease and took Oshie's blast on his mask.

"I saw the entire cage," said Oshie, who returned after missing four games with an upper body injury. "I might have been missing the net on the far side and hit him right in the mask so, you don't get too many opportunities like that and I'm lucky Nick bailed me out."

Flyers coach Dave Hakstol didn't think Washington should have had that last opportunity.

"I don't like it," he said of the Del Zotto penalty. "I think it's two guys battling for position. I think you can make an argument in both directions on it, but I'm not going to stand here and second guess it a whole lot."

Sean Couturier gave the Flyers (30-26-8) a 1-0 lead at 1:19 of the third period. Nick Cousins passed across the ice to Matt Read on the rush and Read centered for Couturier, who redirected the puck past Holtby for his seventh of the season.

The lead was short lived as Dmitry Orlov's blast from just inside the blue line eluded Mason at 2:40 of the third to tie it.

Philadelphia, chasing the second Eastern Conference wild card, is 2-0-1 in its last three games. The Flyers picked up a point against the team they would likely face in the first round if they make the playoffs.

"One's great," Mason said. "Unfortunately weren't able to get that second one, it would have been a big one. Overall I think we played a real good game."

The Flyers came up empty on six power-play opportunities.

"We had a couple good power plays where we had some good opportunities and good looks, unfortunately we couldn't get one to go on one of those," Hakstol said. "For the most part the execution was pretty good."

Washington, meanwhile, has 22 power-play goals in their last 25 games.

"I think Philly did a real good job on some our entries," Capitals head coach Barry Trotz said. "We had some executions that sort of failed. They won a few battles, a few loose pucks. In overtime when it really mattered, when we had a chance to win the game, they responded. That's how you look at it."

The Flyers outshot the Capitals 7-6 in a scoreless first period that featured few scoring chances until several flurries in the final five minutes.

The second period featured more chances but just as many goals as the first. Philadelphia nearly took the lead when Shayne Gotisbehere hit the post during a power play later in the period.

"Some of the power plays were a little weak, but on other ones we had quality chances." Philadelphia's Claude Giroux said.