By Shelly Anderson, The Sports Xchange
1/4

By that standard, he had a thoroughly good night Tuesday against the Nashville Predators, logging two goals in the Penguins' 4-2 victory at PPG Paints Arena.

"For sure. It's always fun to play them, and obviously more fun to score," said Hornqvist, who has three goals and five points in six games against Nashville, where he played his first five NHL seasons. He's in his third season with Pittsburgh.

His current teammates don't necessarily see a difference no matter who the opponent or what the situation.

"He's annoying against me in practice," Pittsburgh goaltender Matt Murray said. "We have our battles in practice. He's good at getting under the opponent's skin. He's got a really good stick in front of the net, and he's not afraid to go there and take a few cross-checks or slashes or whatever.

"He's a warrior for us all the time."

Hornqvist's goals were half of the four consecutive tallies the Penguins (31-13-5) scored after trailing 1-0. They broke a two-game losing streak by winning their first game after the All-Star break.

Nashville (24-18-8) was 7-1-1 in its last nine games before the break. The Predators became the final team this season to lose a regulation game after scoring first. They had been 15-0-5 when they got the first goal.

Calle Jarnkrok, who had a goal and an assist, gave Nashville the 1-0 lead before Chris Kunitz, Trevor Daley and Hornqvist (twice) scored for a 4-1 Pittsburgh lead through two periods.

Colin Wilson brought the Predators within 4-2 with a power-play goal on his own rebound at 3:18 of the third.

"It was tough to give up that second one in the third. You never want to give up goals in the third. We shut it down pretty good after that," said Murray, who made his seventh consecutive start as he establishes himself as the No. 1 goalie ahead of Marc-Andre Fleury. He stopped 37 of 39 shots. He allowed seven goals during the team's two-game losing streak but improved to 11-1-1 at home.

Predators goalie Pekka Rinne, who was 5-1-0 with 11 goals allowed in his previous six starts, made 34 saves.

"I thought we played a good first period," Nashville defemseman Ryan Ellis said. "In the second, we let it get away from us."

Nashville took a 1-0 lead at 14:04 of the first. After the Predators got a lot of bodies and pressure around the crease, Jarnkrok slid a rebound under Murray's pads.

The Penguins tied it 3:15 later. A shot by Ian Cole ricocheted off of Jarnkrok and out to Kunitz, who whipped a shot from the slot over Rinne's glove.

"We know exactly how to play before the game, but after a few days off sometimes it's hard to get into the game," Hornqvist said. "We got the first period behind us and just took over the second and third, I think just playing a little more simple -- get it behind their (defensemen) and finish checks."

Daley's slap shot from the top of the right circle at 3:10 of the second gave Pittsburgh a 2-1 lead.

Then it was Hornqvist's turn.

"I thought (Hornqvist) had a great game," Pittsburgh coach Mike Sullivan said. "He does what he does. He's our north/south guy. He plays in the battle areas. He goes to the net. ... He scores those greasy type goals when he's in tight."

A wraparound goal by Hornqvist at 11:07 of the second increased Pittsburgh's lead to 3-1.

Hornqvist got his second of the night on a power play at 16:12 of the second. From short range he swatted a fluttering puck over Rinne's glove for a 4-1 lead.

Especially when Hornqvist is happening.

NHL // 8 hours ago
Panarin beats Penguins in OT, Rangers rally to advance in Stanley Cup playoffs
May 16 (UPI) -- Star winger Artemi Panarin whipped a wrist shot through traffic for a clutch overtime score, leading the New York Rangers past the Pittsburgh Penguins and into the second round of the Stanley Cup playoffs. 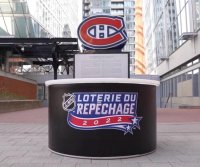