By Rob Rains, The Sports Xchange
1/3

St. Louis Blues Jake Allen watches as the puck goes into the net off the stick of Winnipeg Jets Mark Scheifele in the first period at the Scottrade Center in St. Louis on January 31, 2017. Photo by Bill Greenblatt/UPI | License Photo

ST. LOUIS -- There seems to be something about playing games within the Central Division that brings out the best in the Winnipeg Jets.

Mark Scheifele scored one goal and assisted on two others, including an empty-netter, to lead the Jets to a 5-3 win over the St. Louis Blues on Tuesday night.

The Jets improved to 12-4-1 within the Central Division even though they are just 24-25-4 overall. Winnipeg won its fifth consecutive road game in the division, and it owns seven wins in a row overall against Central opponents.

Trying to explain that success has been harder than winning the games.

"That's tough to answer," said Jets goalie Ondrej Pavelec, who made 24 saves. "They have big guys, skilled guys, pretty much every team is fast. For me, it doesn't really matter who you play against, every team's got those skilled guys, every team has a good power play. You've got to be ready to play."

The Jets were ready Tuesday night, recovering from an early 1-0 deficit after a goal from Alexander Steen to take the lead on goals in the final minute of the first period and the first minute of the second period.

"We know St. Louis is a great team and you've got to ramp up your game to play against them. We know they can score at any given time, and we've got to be ready for that."

Said coach Paul Maurice, "I think we have a better understanding of how the game is played in the Central now than we did in the past."

A power-play goal by Nikolaj Ehlers increased Winnipeg's lead to 3-1 before Vladimir Tarasenko scored his 22nd of the year for the Blues to pull St. Louis within 3-2 going into the final period.

Jacob Trouba scored what proved to be the winning goal 3:33 into the final period when his shot deflected off the skate of Blues defenseman Alex Pietrangelo and into the net.

"Obviously, it was a little fluky, but when you play the right way, I think the game rewards you," Scheifele said. "That's what we were doing. Trouby played awesome for us all night, and he got rewarded with a fluky one, and that's the way she goes."

Each team scored a late goal, with Pietrangelo scoring for the Blues with 13 seconds left and Wheeler scoring into an empty net with three seconds remaining.

Jake Allen made his first start in goal for the Blues since Jan. 19 and played better than he has in recent games, when he gave up 10 goals on 36 shots and was pulled out of each of his previous three starts. He allowed the Jets' first three goals on 11 shots but felt it was a step in the right direction.

"It wasn't the result we wanted, but for my sake, it felt pretty good," said Allen, who finished with 19 saves. "Two lucky defections, but it doesn't matter anymore. We've got to find ways to win."

Wins have been hard to come by for Allen and the Blues lately. He has not won since the Winter Classic game on Jan. 2, and St. Louis lost for the fifth time in its past six games.

The loss also was the fourth in a row at home in regulation for the Blues, the first time that has happened since they lost six consecutive games in 2006. Coach Ken Hitchcock remained stuck on 781 career wins, one away from tying Al Arbour for third on the all-time list.

"These are divisional opponents right now, these are four-point games for us," Allen said. "Tonight was a chance to gain some points, and we let it slip. We've just got to find ways to execute a little better."

Hitchcock knows where the Blues need to improve.

"We made mistakes and we're paying for them right now," Hitchcock said. "We've got to minimize our mistakes. We've got to get more players playing to the same level that some of the guys played at today. There were some really good performances by some people today. We just have to get more people doing it."

NOTES: RW Nail Yakupov replaced RW Dmitrij Jaskin in the Blues' lineup. Yakupov had played in only one of the team's last four games while Jaskin was scratched for the second time since Jan. 12. ... The Blues also made one change on defense, inserting D Carl Gunnarsson into the lineup in place of D Robert Bortuzzo. ... C Mathieu Perreault missed his third consecutive game for the Jets because of an upper-body injury, but could play in Thursday night's game in Dallas, the second stop on a three-game trip. ... Healthy scratches for the Jets were D Julian Melchiori and G Michael Hutchinson. ... The Blues' home game Thursday night against Toronto will start an hour later than normal, at 8 p.m. CT, because of a pregame ceremony to retire the No. 5 jersey of former D Bob Plager. 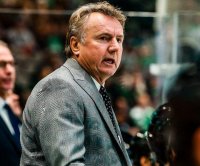 NHL // 4 days ago
Josh Manson nets overtime winner, leads Avalanche over Blues in Game 1
May 18 (UPI) -- Defenseman Josh Manson flipped in a long-range wrist shot 8:02 into overtime to lead the Colorado Avalanche to a narrow win over the St. Louis Blues in Game 1 of a Western Conference semifinals series.

NHL // 6 days ago
Panarin beats Penguins in OT, Rangers rally to advance in Stanley Cup playoffs
May 16 (UPI) -- Star winger Artemi Panarin whipped a wrist shot through traffic for a clutch overtime score, leading the New York Rangers past the Pittsburgh Penguins and into the second round of the Stanley Cup playoffs.