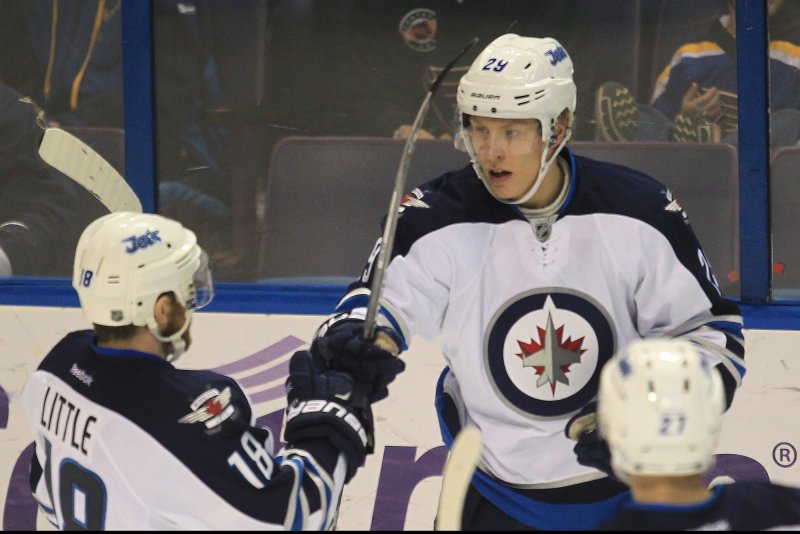 Winnipeg Jets Patrik Laine (R) is congratulated by teammate Bryan Little after scoring a goal in the second period against the St. Louis Blues at the Scottrade Center in St. Louis on December 3, 2016. Photo by Bill Greenblatt/UPI | License Photo

Winnipeg Jets standout forward Patrik Laine was diagnosed with a concussion after a wicked hit during Saturday night's game against the Buffalo Sabres.

Jets coach Paul Maurice confirmed the injury on Sunday. There is no timetable yet for Laine's return to the ice.

Laine was injured during a collision with Sabres defenseman Jake McCabe with 5:51 remaining in the second period. Laine was motionless on the ice for several minutes before being helped back to the locker room by trainers. He did not return to the game.

Maurice said the 18-year-old, who was the second overall pick in the 2016 NHL draft, is still upbeat in light of the diagnosis.

"Patty's got a concussion," Maurice said. "He got tested out last night; see doctors again today. So he'll start the stages of recovery with that. We'll wait till the symptoms subside and then you start increasing workload and getting back on the ice."

Laine is having a sensational first season, leading NHL rookies with 37 points and is tied for the league lead in goals (21) with Toronto Maple Leafs forward Auston Matthews.

While Laine is out, Maurice expects forward Drew Stafford to fill in along with Mark Scheifele and Nikolaj Ehlers.

"It's our best player arguably," Stafford said. "It's not good any time you see a guy in that kind of a position on the ice with his helmet and the way he was. I've been there before, it's not a good feeling. ... I just hope Patty's OK. It's just unfortunate."

After Saturday's game, the Jets said they didn't have an issue with McCabe.

"It was a straight-on hit," said Maurice, adding that Laine and McCabe banged heads after the collision.