By
Randy Sportak, The Sports Xchange 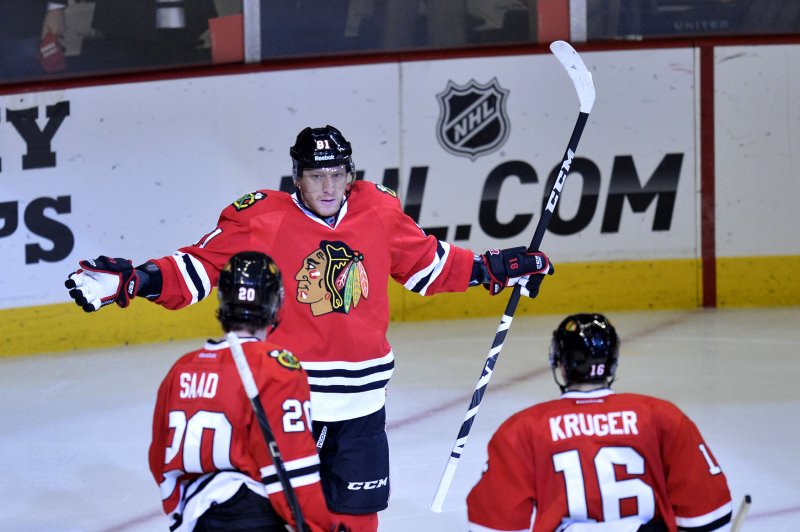 Chicago Blackhawks' Marian Hossa has his team near the top of the NHL Power Rankings for December. File photo by Brian Kersey/UPI | License Photo

The calendar has turned to December, which means the Black Friday and Cyber Monday shopping is done, often in the hopes of nailing down some or all of the Christmas presents.

Sometimes you get what you want and sometimes it's what you need.

With that in mind, here are some gifts to place under the tree for the National Hockey League's squads amidst this month's rankings.

Continued success with their goal scoring, which is nearly a half-goal per game more than any other team in the league. Then again, that's as much a wish for hockey fans because goals are fun.

More of whatever potion Marian Hossa has to surge back among the game's elite. The sure-fire Hall of Famer already has 11 goals. He had 13 last season.

For Jake Guentzel, the 2013 third-round draft choice, to continue writing the story that had him net three goals in his first four NHL games.

Evgeny Kuznetsov returning to the 20-goal, 77-point form of last season. He had just three goals and nine points in the opening quarter.

Not only for Jaden Schwartz to remain healthy, but keep firing pucks into the net at the same rate as his 17.8 percent shooting percentage.

Here's to hoping that eight-year, $64 million contract handed to defenseman Brent Burns isn't an anchor the last few years, as he closes in on 40 years of age.

For defenseman Zach Werenski, the eighth overall pick in the 2015 draft, to be the real deal for the franchise with just two playoff berths in its history.

An end to the run of bad injuries/health that's plagued Steven Stamkos the past couple of seasons, even if it appears to again forced others to step up their games.

That Nicholle Anderson, wife of goalie Craig Anderson, wins her cancer battle. Some things are way, way, way more important than a game.

Now that Anze Kopitar and Marian Gaborik are healthy, Santa will give the Kings a better power play - at least one befitting a Cup contender.

Continued fantastic goaltending from Devan Dubnyk, who is probably the NHL's second-best netminder right now - but almost forgotten because of Montreal's Carey Price.

A time machine to head back to October, in which the Oilers posted a 7-2-0 record. They went 5-8-2 in November, even with the uber-talented Connor McDavid leading the attack.

The Preds perpetually have looked for offensive talent. It's not such a problem now, and will continue to be less of an issue with Viktor Arvidsson joining the fun.

For David Pastrnak, he of 13 goals in 18 games and a torrid pace over the month, to continue being the perfect third wheel on the top line with Patrice Bergeron and Brad Marchand.

The one-two scoring punch on the left wing of Taylor Hall and Michael Cammalleri deserves to be healthy at the same time for the Devils.

No team has more overtime losses than the Stars at six. This team is too talented to win just one of seven games decided in three-on-three play.

Well, the Panthers sure have our attention now, after all their off-ice moves, including the slightly surprise firing of now-former head coach Gerard Gallant. Their need gift is for the players to buy into what management is doing.

Better nanny services, obviously. The young Maple Leafs have just two road wins in a dozen clashes outside of Toronto, yet have won eight of 11 home playdates.

Would it be too much for the Flyers to actually have consistent goaltending? After all, it's been long enough since Philadelphia wasn't a goalie graveyard.

Consistency for the sometimes high-flying club. In November, the Jets lost three of four, went on a 4-0-1 run, lost five straight - all on the road - and the ended the month with a pair of victories.

Rewards for their efforts. The Hurricanes are a good possession team, have a strong power play (10th in the league) and the top penalty kill, but are already falling out of the playoff race.

It would benefit the Canucks for Alexandre Burrows to continue his bounce-back campaign, to help increase the trade value for the pending unrestricted free-agent winger.

Thanks to injuries, Jack Eichel and Evander Kane have combined for just one goal. Let's put an end to that. The Sabres' fans don't deserve a never-ending rebuild.

Andrew Ladd has just two goals and four points, well off the expectations for the player signed to a big free-agent contract. The Islanders need better in a hurry. So does head coach Jack Capuano.

More games against the Edmonton Oilers would be a valuable present. The Coyotes, who swept a home-and-home series in late-November, have an incredible run of 21-0-4 against the Oilers. In fact, the Desert Dogs have only one regulation loss to Edmonton in 31 meetings going back to January 2010.

Goalie Semyon Varlamov's goals-against average sitting above 3.00 can't last all season, can it? Santa wouldn't mind helping him with some better defense, but he must help himself, too.