By Rob Rains, The Sports Xchange
1/3 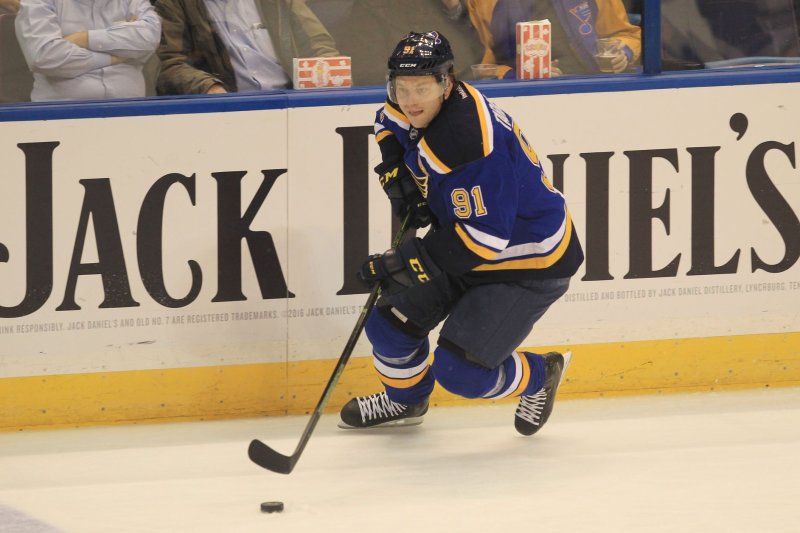 St. Louis Blues' Vladimir Tarasenko of Russia brings the puck up ice against the Dallas Stars in the first period at the Scottrade Center in St. Louis on November 28, 2016. Photo by Bill Greenblatt/UPI | License Photo

ST. LOUIS -- For the second game in a row, the St. Louis Blues lost a late lead Monday night before coming back to win the game in overtime.

That is not a trend they want to continue.

The Blues led with 50 seconds left in the game before Dallas defenseman Jamie Oleksiak scored his second goal of the game after the Stars pulled their goalie, tying the game and sending it to overtime.

At 3:24 of the extra session, right winger Vladimir Tarasenko gave the Blues a 4-3 victory with his 10th goal of the season.

In their previous game on Saturday night, the Blues allowed a tying goal by Minnesota with 1:08 left in regulation before winning the game in a shootout.

"It's frustrating, it just seems like we can't get any bounces," said St. Louis defenseman Alex Pietrangelo, who scored a goal Monday. "We all tried so hard to clear the puck that nobody cleared, and those always come back to haunt you. But just like the last game, we got the two points, and we'll take those."

Blues coach Ken Hitchcock agreed it is a problem that needs to get fixed.

"There's a real concern about the leads, about what we gave up and how we did it," Hitchcock said. "There's a lot of good things to like with what is going on right now, you like our spirit, our ability to come back, but there's some genuine concerns on my part about some elements of our game that they don't hurt you at home but they'll kill you on the road."

The Blues built a 2-0 lead on a goal by Robby Fabbri in the first period and one by Pietrangelo in the second period on a power play.

Oleksiak cut the margin to 2-1 at 16:21 of the second period before Jamie Benn tied in on a power play 1:47 into the third period.

David Perron, one of the hottest players in the NHL, put the Blues ahead 3-2 with his goal off a pass from Jaden Schwartz at 13:12 of the third period.

The goal extended Perron's personal point streak to eight games, the longest current streak in the NHL, while Schwartz has at least one point in his past seven games.

Perron said the Blues had confidence going into overtime despite blowing the late lead again.

The loss dropped the Stars to 1-6 in overtime this season.

"We left coverage on the last goal," Dallas coach Lindy Ruff said. "It was simple as that. We made some mistakes on coverage. We tried some different personnel. It's been a lot of different things, but most of it has been coverage mistakes."

The Stars, who won their previous game against Vancouver, failed again in their attempt to win consecutive games. They won two games in a row only once this season.

"We got a point. I guess it's a positive," Benn said. "Overtime is killing us right now. We have the game plan going into overtime, and it's just up to us to execute. It's obvious that we didn't do that. We leave a pretty good player wide open on the back side."

That player, Tarasenko, has six overtime goals since he entered the league in the 2012-13 season, tied for the third most in the NHL. He was not made available to the media after the game.

NOTES: The Blues kept the same lineup from their last game on Saturday night, with RW Ty Rattie continuing to play in place of RW Nail Yakupov. ... Healthy scratches for the Stars included D Dan Hamhuis, who missed his second game of the season, and D Stephen Johns, who was recalled from the minors on Sunday after playing two games with the AHL Texas Stars. ... LW Alexander Steen and D Joel Edmundson (upper-body injuries) participated in the Blues' morning skate on Monday but were not ready to return to the lineup. ... The Stars will play the Red Wings in Detroit on Tuesday night in the second game of a four-game trip, while the Blues' homestand continues with a game Thursday against the Tampa Bay Lightning.