Travis Kelce, Pat Freiermuth and T.J. Hockenson join Kittle and Andrews in the Top 5 of my weekly Top 20 rankings, which are listed below.

All of my must-start options are within the Top 14 of my rankings, which means they should be started in leagues with at least 14 teams that require starting tight ends.

The Arizona Cardinals and Carolina Panthers are on bye in Week 13. Tight ends from those teams should be benched or dropped this week.

Kittle and the San Francisco 49ers will host the Miami Dolphins on Sunday in Santa Clara, Calif. The veteran tight end scored in three of his last five games and averaged 5.7 targets, four catches and 50 yards per game through his nine appearances this season.

The Dolphins allowed the second-most catches and third-most fantasy points per game to tight ends through 12 weeks. I expect the Dolphins defense to focus most of their attention on 49ers running back Christian McCaffrey and wide receivers Deebo Samuel and Brandon Aiyuk.

Look for Kittle to catch at least six passes for 75 yards and score a touchdown. He is my No. 2 play.

Conklin is a typical touchdown-or-bust fantasy football play, but I like his chances this week. The New York Jets will take on the Minnesota Vikings on Sunday in Minneapolis.

Conklin totaled at least 40 receiving yards in five of his 11 starts this season. He also scored three times. The Vikings also allowed the ninth-most fantasy points per game to tight ends through 12 weeks.

I expect the Jets to fall behind early in this road matchup, which should lead to more passing opportunities for quarterback Mike White. 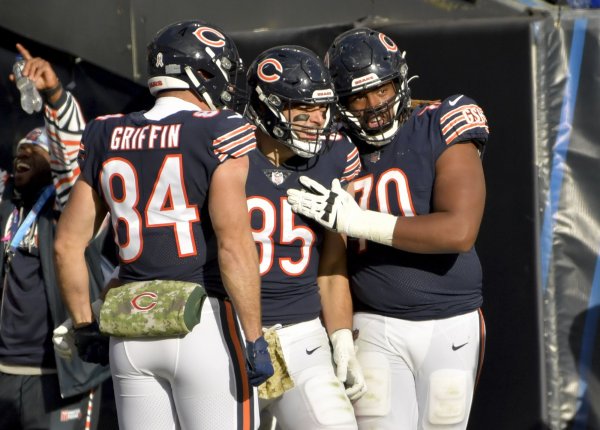 Kmet is my No. 10 play for Week 13. The Chicago Bears tight end totaled just six catches for 62 yards over his last two games, but scored five times in three games from Week 8 through Week 10.

The Bears lost wide receiver Darnell Mooney to a season-ending injury last week and will need another pass catcher to step up in his absence.

Look for Kmet to haul in at least five catches for 50 yards this week against the Green Bay Packers. The Packers are decent at defending opposing tight ends, but I expect the Bears to put up a lot of points in this meeting of NFC North rivals.

Kmet is a must-start play in all leagues that have at least 10 teams and require starting tight ends.

Johnson lands at No. 12 in my Week 13 rankings. The New Orleans Saints tight end will face the Tamap Bay Buccaneers on Monday in Tampa, Fla.

Johnson totaled four catches for 40 yards in Week 2 against the Buccaneers. He also scored in four of his last six games. The Buccaneers allowed the fourth most catches and fifth-most fantasy points per game to tight ends through 12 weeks. Look for Johnson to total at least 40 receiving yards. He could climb into Top 10 territory if he reaches the end zone.