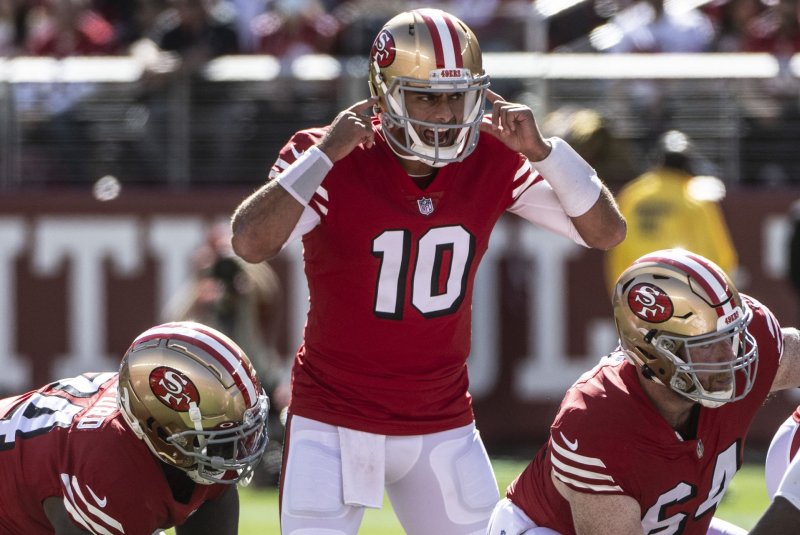 The 49ers also logged three sacks, two interceptions and a forced fumble in the 38-10 triumph Monday at Estadio Azteca. Star running back Christian McCaffrey totaled 14 touches for 106 yards from scrimmage for the 49ers.

"Everyone was stepping up when their number was called," Garoppolo told reporters. "Guys stepped up and made plays. The offensive line gave me a ton of time and made things easier. It was a good night."

"I felt we had some opportunities to make some plays," Cardinals coach Kliff Kingsbury said. "Not getting the fourth downs and interceptions were tough, but that's a good team. ... They found a way to make plays."

The Cardinals and 49ers punted to open the game. McCoy then led the Cardinals to the 49ers 23-yard line, where Matt Prater made a 40-yard field goal about seven minutes into the first quarter. The 49ers and Cardinals punted again on their next drives.

Garoppolo threw a 7-yard touchdown toss to Aiyuk about 1:20 into the second quarter. Kicker Robbie Gould made the extra point attempt to push the 49ers lead to 7-3.

Garoppolo to Aiyuk for the second time tonight!

The Cardinals answered with a 9-play, 75-yard drive. That possession ended with a 2-yard James Conner touchdown run and cut the deficit to four points.

Gould made a 39-yard field goal less than four minutes later to push the 49ers lead back to seven points. The 49ers added an 8-play, 75-yard touchdown drive to start the second half. Wide receiver Deebo Samuel ended that drive with a 39-yard touchdown run.

Garoppolo threw a 32-yard touchdown pass to Kittle about five minutes into the fourth quarter for the final points of the game.

Kansas City Chiefs tight end Travis Kelce sheds Los Angeles Chargers safety Derwin James Jr. and gets to the end zone for the winning touchdown during the second half at SoFi Stadium in Inglewood, Calif., on Sunday. The Chiefs beat the Chargers 30-27. Photo by Mike Goulding/UPI | License Photo