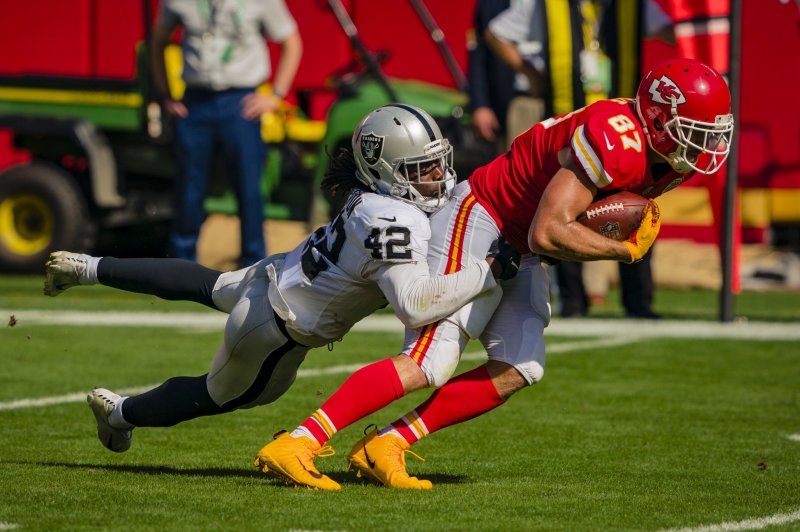 Mahomes completed 29 of 43 passes for 292 yards in the 30-29 win at GEHA Field at Arrowhead Stadium in Kansas City, Mo. The Chiefs totaled 29 first downs and converted 7 of 12 third-down attempts. Neither team logged a turnover in the AFC West matchup.

"Doubt never seeped in with this group," Kelce told reporters. "That's because we've got a lot of veteran guys who know, when times get tough, we just rally and stick together."

Raiders quarterback Derek Carr threw a 58-yard touchdown pass to star wide receiver Davante Adams midway through the first quarter for a 7-0 edge. Running back Josh Jacobs capped off the Raiders' next 10-play, 69-yard drive with a 1-yard touchdown run for a 14-0 lead.

Kicker Daniel Carlson made a 53-yard field goal on the next drive to push the Raiders lead to 17 points. The Chiefs offense then came alive.

Mahomes led an 11-play, 75-yard drive, capped off with a 1-yard touchdown to Kelce less than five minutes after the Carlson field goal.

Carlson answered with a 50-yard kick on the next drive, but Chiefs kicker Matthew Wright responded with a 59-yard kick as time expired in the first half to cut the deficit to 10 points at the break.

The Chiefs went on a 12-play, 75-yard touchdown drive to start the second half. Mahomes threw a 4-yard strike to Kelce to end that possession with a score. He found Kelce for another 8-yard touchdown about six minutes later to give the Chiefs a 24-20 edge.

Is @tae15adams the best WR in the game?

Carlson made a 57-yard field goal 55 seconds into the fourth quarter. Mahomes then led yet another 13-play, 75-yard drive, capped off with a 1-yard touchdown pass to Kelce. The Chiefs failed to complete a two-point conversion after that score, but led 30-23 with 7:25 remaining.

The Raiders answered with a 7-play, 75-yard touchdown drive. Carr threw a 48-yard touchdown strike to Adams to end that drive. The Raiders then opted to go for a two-point conversion for a chance to take the lead, but failed on the attempt.

The Chiefs punted back on their next drive, but the Raiders turned the ball over on downs on their final possession.

Carr completed 19 of 30 passes for 241 yards and two scores in the loss. Raiders running back Josh Jacobs totaled 21 carries for 154 yards and a score.

NFL // 8 hours ago
Super Bowl: Kelce brothers root for each other as teams prepare to battle
PHOENIX, Feb. 8 (UPI) -- Jason Kelce and Travis Kelce won't discuss strategies for when the Philadelphia Eagles and Kansas City Chiefs battle Sunday in Super Bowl LVII, The brothers said they will still root for each other in the game.

NFL // 6 days ago
49ers 'content' with QBs Purdy, Lance; won't re-sign Garoppolo, coach says
Feb. 2 (UPI) -- The San Francisco 49ers are "content" with Brock Purdy and Trey Lance as the top quarterbacks on their roster and will not bring back Jimmy Garoppolo next season, coach Kyle Shanahan told reporters.
Advertisement

Super Bowl: Kelce brothers root for each other as teams prepare to battle