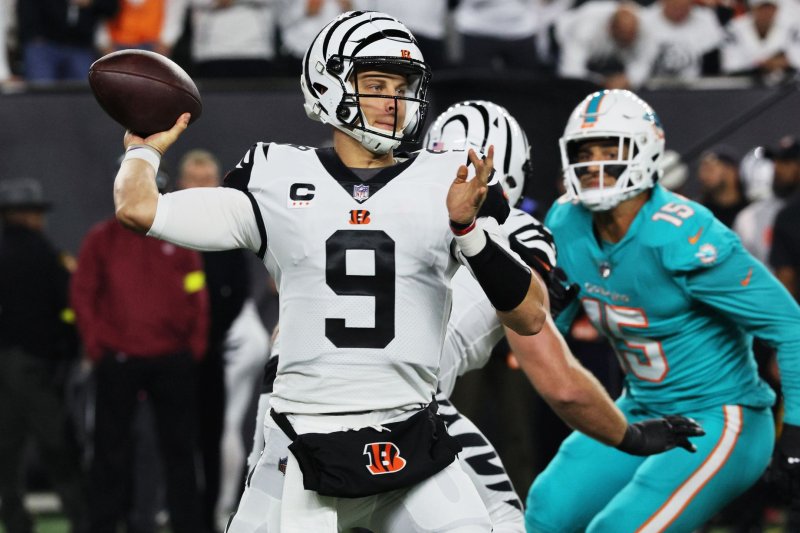 Sept. 30 (UPI) -- Joe Burrow threw two passing scores to lead the Cincinnati Bengals to their second win of the season, while the Miami Dolphins lost quarterback Tua Tagovailoa to a concussion in the first game of the NFL's Week 4 slate.

Burrow completed 20 of 31 passes for 287 yards in the 27-15 victory Thursday at Paycor Stadium in Cincinnati. Tagovailoa completed 8 of 14 passes for 110 yards and an interception before he sustained the head injury just before halftime. He was evaluated for the concussion, entered the protocol and was sent to a local hospital.

The Dolphins said Tagovailoa had movement in all of his extremities and was conscious. He was discharged from the hospital Thursday night and traveled back to Miami with his teammates.

"That was an emotional moment that is not part of the deal anyone signs up for, even though you know it's a possibility," Dolphins coach Mike McDaniel told reporters. "To have something where you have to get taken off on a stretcher.

"All of his teammates and myself were all very concerned the best news we could get is that everything checked out. He didn't have anything more serious than a concussion."

Burrow's Bengals held a three-minute edge in time of possession, but trailed the Dolphins 20-16 in first downs and 378 to 371 in total yards. The Bengals offense converted 8 of 15 third-down conversions and scored twice in three red-zone appearances.

"On offense, we are finding our stride," Burrow said. "On defense, we've been great all year. We're starting to click on all cylinders."

The Bengals used a 9-play, 75-yard drive to score on the game's first possession. Running back Joe Mixon ran for a 5-yard score to end that drive. The Dolphins answered with a 23-yard Jason Sanders field goal. Sanders added another 48-yard kick midway through the second quarter to cut the deficit to 14-6.

The Dolphins were lined up for a 2nd-and-7 play on offense during Tagovailoa's injury sequence about six minutes before halftime. The Dolphins quarterback took the snap and dropped back in the pocket. Bengals defensive tackle Josh Tupou then chased down Tagovailoa and wrapped his arm around the quarterback. He then swung him down to the ground, which resulted in Tagovailoa's back and head hitting the turf.

Tagovailoa remained on the ground before he was taken off the field on a stretcher and transported by ambulance to the University of Cincinnati Medical Center.

Burrow connected with Higgins for a 59-yard score about five minutes later. Bridgewater answered with a 7-yard touchdown to running back Chase Edmonds 15 seconds before halftime, making the score 14-12 at the break.

Sanders made a 20-yard field goal for a one-point edge late in the third, but the Dolphins never scored again.

Bengals kicker Evan McPherson made a 19-yard kick about three minutes into the fourth. He added a 57-yard field goal about six minutes later for a 5-point edge.

Burrow connected with tight end Hayden Hurst for a 2-yard score with 1:56 remaining for the final points of the night.

Miami Dolphins quarterback Tua Tagovailoa throws before the game against the Cincinnati Bengals at Paycor Stadium in Cincinnati on September 29, 2022. Tagovailoa played four days after he suffered what the team initially said was a "head injury." Photo by John Sommers II/UPI | License Photo