MIAMI, Sept. 26 (UPI) -- Fantasy football players with stock in Trevor Lawrence and Russell Gage are among my winners from Week 3. Alvin Kamara and Tom Brady stock owners are Week 3 losers.

I considered average draft position (ADP), Week 3 opportunities and performance and injuries when deciding which players should be winners and losers as we enter the fourth week of the season.

Some of these players can be dropped, while others should be benched. Some of the players just sustained injuries or provided a poor performance and might soon rebound for your fantasy team.

My overall biggest winners this week are stock owners in Jamaal Williams, who now appears to be in line for a large workload for the Detroit Lions due to a shoulder injury to starting running back D'Andre Swift.

Lawrence completed 28 of 39 passes for 262 yards and three scores in a Week 3 win over the Los Angeles Chargers. He also threw for 235 yards and two scores in Week 2.

Lawrence is now a low-end QB1 in leagues with at least 14 teams due to his recent success and the Jaguars' rejuvenated offense. The Jaguars will face the Philadelphia Eagles in Week 4 in what isn't a great matchup, but Lawrence is still worth a roster spot if you need a streaming option down the road or a bye-week fill in.

Detroit Lions running back Jamaal Williams (C) will be a high-end fantasy football RB2 until D'Andre Swift returns to the lineup. File Photo by Mark Black/UPI

D'Andre Swift tops the Lions depth chart at the running back position, but Williams continues to see of ton of work and could be in line for more fantasy football success due to the injury Swift sustained in Week 3.

Swift scored twice and averaged 100 rushing yards and 31 passing yards per game through his first two appearances this season. He then totaled 46 yards from scrimmage on 10 touches, but is now expected to miss time due to his injury.

Williams already was cutting into Swift's production. He is tied for first in the NFL with 11 rushing attempts inside the 20-yard line and also ranks first in the league with eight carries inside the 10-yard line. Williams also scored four touchdowns this season, including two in Sunday's loss to the Minnesota Vikings.

Williams will be a high-end RB2 in my weekly rankings until Swift returns to the Lions lineup. The Lions will battle the Seattle Seahawks in Week 4. The Seahawks allowed the second-most rushing yards and tied for allowing the fifth-most fantasy points to running backs through three weeks.

Chicago Bears running back Khalil Herbert (R) runs the ball against the Houston Texans on Sunday at Soldier Field in Chicago. Photo by Mark Black/UPI

Herbert also provided great fantasy football value in Week 3 after he earned extra opportunities due to an injury. Bears starter David Montgomery sustained lower-leg injuries Sunday against the Houston Texans, which cleared a path to more playing time for Herbert.

Herbert erupted for 157 yards and two scores on 20 carries in the victory. Herbert totaled 83 rushing yards through the first two games of the season, but appears to have carved out a role even if Montgomery doesn't miss time. He deserves a spot on your roster and could hold RB1 value if he earns any starts this season.

The Buccaneers played without Julio Jones, Mike Evans and Chris Godwin in Week 3, which resulted in an abundance of opportunities for fellow wide receiver Russell Gage.

Gage totaled 12 catches for 87 yards and a score in the Buccaneers' loss to the Green Bay Packers on Sunday in Tampa, Fla.

Evans will return in Week 4, while the status of Jones and Godwin remains uncertain. Gage should continue to stay in lineups as a low-end WR3, who can be used in good matchups.

The Buccaneers will face the Kansas City Chiefs in Week 4. I expect that game to be a shootout, with Buccaneers quarterback Tom Brady and Chiefs quarterback Patrick Mahomes airing it out. Gage is a great bet to score another touchdown, especially if Godwin and/or Jones misses the game. 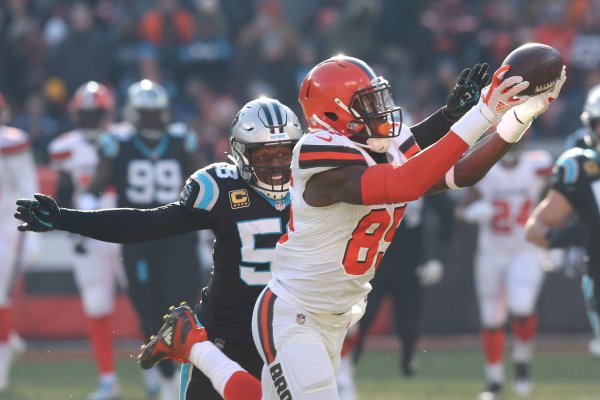 Njoku went off for 89 yards and a touchdown on nine catches in Week 3. He received 10 targets in the win over the Pittsburgh Steelers on Thursday in Cleveland. He also received five targets in Week 2.

I expect the Browns to keep Njoku involved in their game plan going forward. They will face the Atlanta Falcons in Week 4. The Falcons allowed the second-most fantasy points to tight ends through the first two weeks of the season. I like Njoku as a touchdown-or-bust TE1 for Week 4. 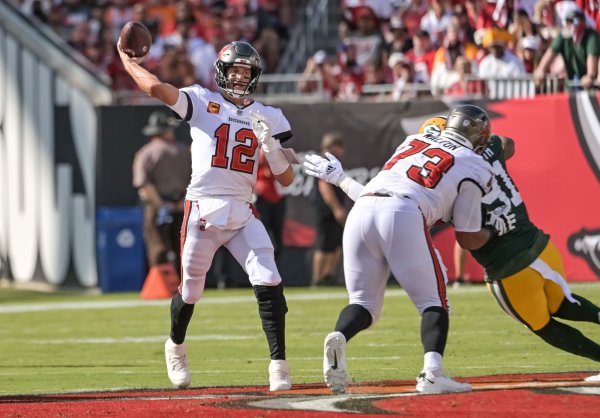 Tampa Bay Buccaneers quarterback Tom Brady (L) gets off a pass against the Green Bay Packers on Sunday at Raymond James Stadium in Tampa, Fla. Photo by Steve Nesius/UPI

Brady threw just three total touchdowns through his first three games this season and can't be trusted as an every-week fantasy football play. The Buccaneers have played without several top wide receivers and offensive linemen early on, which is behind some of Brady's struggles, but I would look to try to trade Brady if he was on my fantasy team.

Brady totaled 271 passing yards and one score in the Buccaneers' Week 3 loss to the Green Bay Packers. The Buccaneers will face the Chiefs in Week 4 in a game that should be a shootout. Brady has a chance to have his best game of the season this week and could be a great sell-high option if he comes through against the Chiefs.

Kamara totaled just 100 rushing yards, fumbled and failed to score a touchdown through his first two starts this season. He also missed Week 2 due to injury and is splitting the workload with Mark Ingram.

Kamara doesn't appear likely to pay off on his average draft position. I would look to include the Saints running back in a trade package and buy low on another player.

Taylor was the No. 1 overall pick in many fantasy drafts. He erupted for 161 yards and a score on 31 carries in Week 1, but averaged just 62.5 rushing yards per game in his last two appearances.

I would keep Taylor and hope better days are ahead for the Colts, who also have dealt with numerous injuries to several key players. The Colts will battle the Tennessee Titans in Week 4. The Titans just allowed 97 yards from scrimmage to Las Vegas Raiders running back Josh Jacobs in Week 3.

Look for Taylor to bounce back strong Sunday in Indianapolis.

Robinson scored his first touchdown of the season in Week 2, but caught just two passes for 23 yards in Week 3. He can only be started as a low-end WR3 in good matchups going forward as the Rams search for an offensive identity.

Robinson should stay on rosters, but I would recommend starting other options if they have better matchups. He appears to be a touchdown-or-bust option. The Rams will face the San Francisco 49ers in Week 4. The 49ers allowed the fourth-fewest fantasy points to wide receivers through three weeks.

Kittle caught four passes for just 28 yards and failed to find the end zone in his first game of the season Sunday against the Denver Broncos. He is another player who can't be trusted on a weekly basis due to his dependency on touchdown scoring.

The 49ers' passing game doesn't appear to have enough volume to warrant multiple pass-catching fantasy football starters on a weekly basis. Kittle should only stay in lineups, regardless of matchup, in leagues with at least 12 teams that require starting at tight end.

The 49ers will face the Rams on Oct. 3 in Santa Clara, Calif. The Rams allowed the fourth-fewest fantasy points to tight ends through three weeks. They also have yet to allow a touchdown to the position.

Miami Dolphins quarterback Tua Tagovailoa throws before the game against the Cincinnati Bengals at Paycor Stadium in Cincinnati on September 29, 2022. Tagovailoa played four days after he suffered what the team initially said was a "head injury." Photo by John Sommers II/UPI | License Photo

NFL // 3 days ago
Steelers overcome Colts rally, earn fourth win
Nov. 29 (UPI) -- The Pittsburgh Steelers jumped out to an early lead, overcame a late rally and took the final edge on a Benny Snell touchdown with 10 minutes remaining to beat the Indianapolis Colts in the NFL's Week 12 finale.