Carlos Alcaraz of Spain returns a ball to Jannik Sinner of Italy in the quarterfinals of the 2022 U.S. Open on Wednesday in Flushing, N.Y. Photo by John Angelillo/UPI | License Photo

MIAMI, Sept. 9 (UPI) -- The first week of the 2022 NFL regular season, the men's and women's tennis finales at the U.S. Open and the WNBA Finals lead this weekends sports schedule.

Dozens of games from college football, domestic and international soccer leagues and MLB's regular season also will air from Friday through Sunday.

But the conclusion of the lone tennis Grand Slam hosted in the United States will be the main menu item for hungry sports fans.

No. 5 Casper Ruud of Norway will No. 27 Karen Khachanov of Russia in a men's semifinal at 3 p.m. Friday in Flushing, N.Y.

No. 22 Frances Tiafoe of the United States also will meet No. 3 Carlos Alcaraz of Spain in another men's semifinal at 7 p.m. at the USTA Billie Jean King National Tennis Center.

No. 5 Ons Jabeur of Tunisia will face No. 1 Iga Swiatek of Poland in the women's final at 4 p.m. Saturday on ESPN.

The winners from each final will receive $2.6 million apiece.

Twenty-eight other NFL teams will play their openers Sunday. The Seattle Seahawks will host the Denver Broncos on Monday in the final game of Week 1.

The Las Vegas Aces beat the Seattle Storm in the WNBA's Semifinals earlier this week to advance to the title series. The Connecticut Sun clinched the other spot in the WNBA Finals on Thursday, with a Game 5 win over the Chicago Sky.

The Sun and Aces will tip off Game 1 of the WNBA Finals at 3 p.m. Sunday in Paradise, Nev.

The best-of-five game series could run through Sept. 20. All WNBA Finals games will air on ESPN.

Boise State at New Mexico at 9 p.m. on CBSSN

Guardians at Twins at 8 p.m. on Apple TV+

Bundesliga: VfB Stuttgart at Bayern Munich at 9:30 a.m. on ESPN+

Bundesliga: Borussia Dortmund at RB Leipzig at 9:30 a.m. on ESPN+

Serie A: Torino at Inter Milan at noon on Paramount+

La Liga: Celta Vigo at Atletico at 3 p.m. on ESPN+

MLS: Los Angeles Galaxy at Nashville at 3:30 p.m. on Twitter

Alabama at Texas at noon on Fox

Southern Miss at Miami at noon on ACC Network

South Carolina at Arkansas at noon on ESPN

Wake Forest at Vanderbilt at noon on SEC Network

Missouri at Kansas State at noon on ESPN2

Duke at Northwestern at noon on FS1

Ohio State at Penn State at noon on ABC

Washington State at Wisconsin at 3:30 p.m. on Fox

Samford at Georgia at 4 p.m. on SEC Network

Akron at Michigan State at 4 p.m. on Big Ten Network

Kent State at Oklahoma at 7 p.m. on ESPN+

Kentucky at Florida at 7 p.m. on ESPN

Central Arkansas at Ole Miss at 7 p.m. on ESPN+

Hawaii at Michigan at 8 p.m. on Big Ten Network

Mississippi State at Arizona at 11 p.m. on FS1

Guardians at Twins at 7 p.m. on Fox

La Liga: Mallorca at Real Madrid at 8 a.m. on ESPN+

Serie A: Salernitana at Juventus at 2:45 p.m. on Paramount+

Saints at Falcons at 1 p.m. on Fox

Browns at Panthers at 1 p.m. on CBS

Steelers at Bengals at 1 p.m. on CBS

Patriots at Dolphins at 1 p.m. on CBS

Jaguars at Commanders at 1 p.m. on Fox 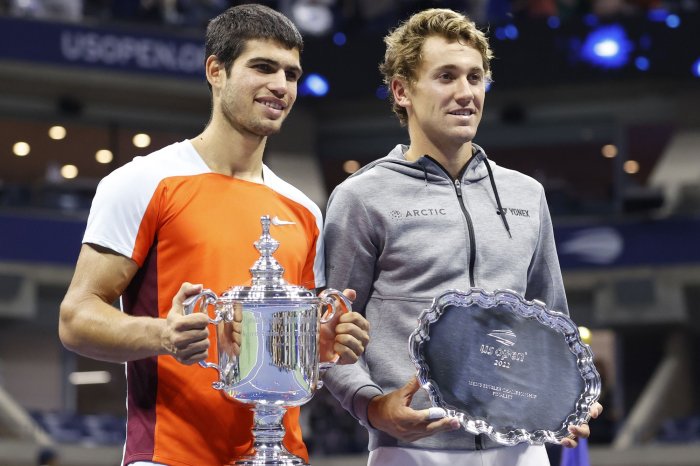 Carlos Alcaraz of Spain (L) and Casper Ruud of Norway stand with their trophies after the Men's Finals of the 2022 U.S. Open Tennis Championships at the USTA Billy Jean King National Tennis Center in Forest Hills, N.Y. on September 11, 2022. Alcaraz won the match 6-4, 2-6, 7-6, 6-3. Photo by John Angelillo/UPI | License Photo

NFL // 4 days ago
FCC proposes $504,000 fine for Fox TV over fake emergency alert
Jan. 24 (UPI) -- A video promotion aired before a game between the New York Giants and Philadelphia Eagles on the Fox TV network in 2021 violated federal rules about mimicking an emergency alert, the FCC said Tuesday in proposing a $504,

NFL // 5 days ago
McCaffrey, 49ers slip by 'disappointed' Cowboys, advance to NFC title game
Jan. 23 (UPI) -- Christian McCaffrey scored on a go-ahead touchdown run at the start of the fourth quarter to give the San Francisco 49ers their final edge in a victory over the Dallas Cowboys, clinching a spot in the NFC title game.

NFL // 6 days ago
Damar Hamlin attends Buffalo's playoff game against Cincinnati
Jan. 22 (UPI) -- Buffalo Bills safety Damar Hamlin made his first public appearance on Sunday, joining his team in the locker room ahead of its Divisional Round game against the Cincinnati Bengals at Highmark Stadium in Orchard Park, N.Y