The sale of the Denver Broncos to former Walmart executive Rob Walton must be approved by the NFL's finance committee and at least 24 team owners. Photo courtesy Walmart Corporate/Wikimedia Commons

June 8 (UPI) -- Former Walmart Chairman Rob Walton -- who's one of the wealthiest people in the world -- has agreed to buy the NFL's Denver Broncos for more than $4 billion.

The Broncos announced the deal on Tuesday, saying that they entered into a purchase and sale agreement with the Walton-Penner family ownership group.

Sources told ESPN, NFL Network and the Wall Street Journal that the winning bid from the group was for $4.65 billion, the most-expense price in North American sports franchise history.

The sale must be approved by the NFL's finance committee and at least 24 NFL owners.

Walton, 77, heads the ownership group, which also includes his daughter Carrie Walton Penner, her husband Greg Penner and Mellody Hobson. Hobson, co-CEO of Ariel Investments, is chairwoman of the board at Starbucks and a director at JP Morgan Chase.

The Denver Broncos and the Walton-Penner family have entered into a purchase and sale agreement to acquire the team.

"We are thrilled to be selected to move forward with the purchase of the Denver Broncos," Walton said in a statement. "Carrie, Greg and I are inspired by the opportunity to steward this great organization in a vibrant community full of opportunity and passionate fans.

"Having lived and worked in Colorado, we've always admired the Broncos. Our enthusiasm has only grown as we've learned more about the team, staff and Broncos Country over the last few months."

The Pat Bowlen Trust announced in February that it planned to sell the AFC West franchise. Bowlen and his siblings bought the Broncos in 1984 and he later acquired his family's stakes in the team. 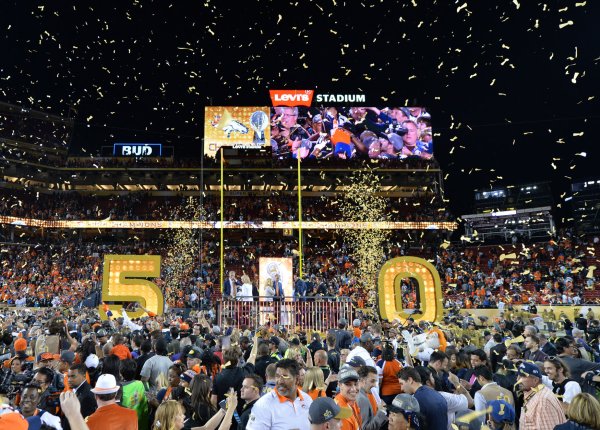 Confetti falls and fans celebrate on the field after the Denver Broncos won their third NFL title in Super Bowl 50 at Levi's Stadium in Santa Clara, Calif., on February 7, 2015. File Photo by Kevin Dietsch/UPI

"I have enjoyed getting to know Rob Walton, Carrie Walton Penner and Greg Penner throughout this process," Broncos President and CEO Joe Ellis said.

"Learning more about their background and vision for the Denver Broncos, I am confident that their leadership and support will help this team achieve great things on and off the field."

The eldest son of Walmart founder Sam Walton, Rob Walton is one of the 20 richest people in the world with an estimated net worth of about $62 billion. He was Walmart chairman between 1992 and 2015.

The Broncos are scheduled to start the 2022 regular season in Seattle against the Seahawks on Sept. 12. Denver finished last in the AFC West in each of the last two seasons. They last won the division in 2015 prior to winning their third NFL title in Super Bowl 50.