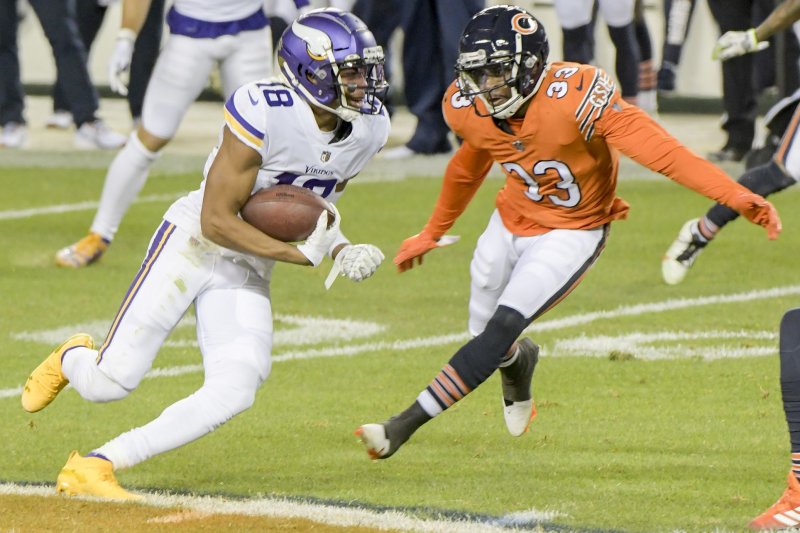 Brandon Aiyuk, DeVonta Smith, Donovan Peoples-Jones and James Washington are among my other favorite wide receivers to start this week.

Justin Jefferson of the Minnesota Vikings is the No. 4 wide receiver in fantasy football this season on a points-per-game basis. The Vikings star scored in three of his last four games.

He received an average of 11.8 targets per game over his last five appearances. He secured 39 of those looks for 656 yards and four scores over that span.

This week, the Vikings battle the Chicago Bears. The Bears tied the Arizona Cardinals and Indianapolis Colts for allowing the most receiving touchdowns to wide receivers through 14 weeks.

They also tied the Washington Football Team for allowing the third-most fantasy points per game to the position.

Look for Jefferson to secure at least 10 catches for 100 yards and a score in this matchup. He is my top option for Week 15 and an elite play throughout the postseason.

Tampa Bay Buccaneers wide receiver Chris Godwin is my No. 4 option this week. Godwin received 17 targets in Week 13 and 15 targets in Week 14. He went off for a total of 25 catches for 248 yards in those two contests.

Look for his high-usage rate to continue this week, when the Buccaneers battle the New Orleans Saints. The Saints' run defense remains strong. The Saints pass defense allowed the fifth-most receiving yards to wide receivers through 14 weeks.

I expect the Buccaneers to dominate this matchup, with quarterback Tom Brady and the passing attack leading the way. Godwin is a near lock for another 10-plus targets and should eclipse 100 receiving yards for a third-consecutive game.

Brandon Aiyuk of the San Francisco 49ers is No. 15 in my Week 15 wide receiver rankings. Aiyuk received a season-high 11 targets in Week 14. He secured six of those targets for 62 yards and a score.

Tight end George Kittle remains the 49ers' top pass catching option, but Aiyuk should get favorable coverage in this matchup. I expect him to post at least eight catches for 80 yards and a score. He can be used as a WR2 in leagues with at least 14 teams.

Philadelphia Eagles rookie DeVonta Smith is No. 26 in my Week 15 wide receiver rankings. Smith averaged just 32.7 yards on 2.7 catches per game over his last three appearances, but I expect a rebound this weekend against the Washington Football Team.

Washington's defense is decimated due to several players being added this week to the reserve/COVID-19 list. The same defense tied for allowing the third-most fantasy points per game to wide receivers so far this season.

Smith should catch at least eight passes for 80 yards in this matchup. He can be used as a WR3 in leagues with at least 14 teams.

The Cleveland Browns also were hit hard by COVID-19 this week. I expect wide receiver Donovan Peoples-Jones to see increased usage do to the absence of several other Browns offensive weapons.

Peoples-Jones caught five passes for 90 yards in Week 14. This week, the Browns face the Las Vegas Raiders. The Raiders just allowed 48 points in Week 14 to the Kansas City Chiefs.

The Browns will likely lean on running back Nick Chubb in this matchup, but Peoples-Jones should get enough looks to warrant WR3 consideration.

Peoples-Jones is the No. 28 wide receiver in my Week 15 rankings.

The Steelers host the Tennessee Titans on Sunday in Pittsburgh. The Titans allowed a league-high 2,569 receiving yards and the second-most fantasy points per game to wide receivers through 14 weeks.

Washington totaled four catches for 65 yards and a score in Week 14. I expect him to be even more productive this weekend, with at least six catches for 80 yards against the Titans. He could find himself in WR2 territory if he reaches the end zone.

26. DeVonta Smith, Philadelphia Eagles vs. WAS

Man who caught Judge's home run ball, worth up to $2M, unsure about what to do