Cincinnati Bengals running back Joe Mixon (28) runs for a touchdown against the Baltimore Ravens on Sunday at M&T Bank Stadium in Baltimore. Photo by Tasos Katopodis/UPI | License Photo

Kenneth Gainwell and Alex Collins are two other running backs to consider for your weekly lineup if you are in a league that features at least 14 teams.

Josh Jacobs, Kenyan Drake, Latavius Murray and Devonta Freeman are among the players who should not be in starting lineups, as the Baltimore Ravens and Las Vegas Raiders get Week 8 byes.

Plenty of other running backs with great matchups this week are available aside from the elite names. Try to find a player who will get a lot of carries, targets in the passing game or goal line work and has a good Week 8 matchup.

Cincinnati Bengals running back Joe Mixon is the top player in my Week 8 rankings. Mixon ranks third among the NFL's rushing leaders. He also earned the second-most carries through his first seven games and scored in three of his last four starts.

This week, the Bengals face the New York Jets. The Jets allowed the most rushing touchdowns and fantasy points per game to running backs through six games this season. They also allowed a league-high 193.6 yards from scrimmage per game to the position.

Look for the Bengals to give Mixon at least 30 touches in this matchup. I expect more than 150 yards from scrimmage and a score from the Bengals workhorse.

Ezekiel Elliott and the Dallas Cowboys were on bye in Week 7. The star running back returns in Week 8 to face the Minnesota Vikings. The Vikings allowed the 11th-most rushing yards to running backs through their first six games.

They also allowed the seventh-most rushing yards per game so far this season. Elliott is averaging the fourth-most fantasy points per game among running backs and scored in four of his last five starts.

Look for the Cowboys star to total at least 120 yards and a score in this matchup Sunday in Minneapolis. He is my No. 2 running back for Week 8.

James Robinson of the Jacksonville Jaguars is the No. 3 running back in my Week 8 rankings. Robinson got off to a slow start in 2021, but scored touchdowns in each of his last four games. He posted at least 100 yards from scrimmage in three of those matchups, including 149 rushing yards in Week 6.

This week, the Jaguars face the Seattle Seahawks. The Seahawks surrendered a league-high 1,274 yards from scrimmage to running backs through their first seven games. They also allowed the fourth-most fantasy points per game to the position.

Robinson should post at least 100 yards from scrimmage in this matchup. He is an elite RB1 play.

Los Angeles Rams running back Darrell Henderson is the No. 8 player in my Week 8 rankings. Henderson faces the Houston Texans. The Texans allowed the most rushing yards in the NFL in their first seven games this season.

They also tied for allowing the sixth-most fantasy points per game to the position. Henderson scored in four of his six starts this season and should get another touchdown in this matchup. I expect the Rams to build a huge lead in this game, which will increase Henderson's workload.

Kenneth Gainwell of the Philadelphia Eagles was my top waiver wire addition this week. Eagles starter Miles Sanders sustained a sprained ankle in Week 7 and isn't expected to pay in Week 8. That opens the door for Gainwell to get the majority of the backfield workload.

Gainwell, my No. 14 option, picked up 61 yards from scrimmage and a score in Week 7. He should provide value as a runner and pass catcher again Sunday against the Detroit Lions.

The Lions allowed the second-most fantasy points per game to running backs through their first seven games. They also allowed a league-high 12 touchdowns to the position. Gainwell can be used as a low-end RB1/high-end RB2 or flex streamer this week due to the great matchup and increased workload.

Seattle Seahawks running back Alex Collins isn't the most explosive option in fantasy football, but is useful due to his great matchup in Week 8.

The Seahawks host the Jacksonville Jaguars on Sunday in Seattle. The Jaguars tied for allowing the second-most rushing touchdowns and allowed the eighth-most fantasy points per game to running backs through seven weeks.

Collins will get another start Sunday in place of injured starter Chris Carson. He piled up 101 yards yards and scored in Week 6, but totaled just 35 yards on the ground in Week 7. I expect at least 100 yards from scrimmage from Collins this week.

21. Javonte Williams, Denver Broncos vs. WAS

27. Melvin Gordon, Denver Broncos vs. WAS 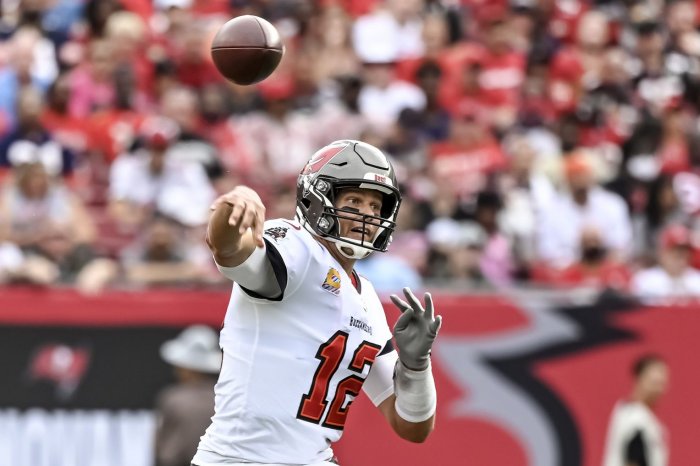 Tampa Bay Buccaneers quarterback Tom Brady passes against the Chicago Bears during the first half at Raymond James Stadium in Tampa, Fla. on Sunday. Photo by Steve Nesius/UPI | License Photo

NFL // 6 days ago
Mahomes, Kelce show off 'ridiculous' chemistry, lead Chiefs past Chargers
Nov. 21 (UPI) -- Travis Kelce's third touchdown catch of the day also proved to be the game-winner, with the All-Pro hauling in a 17-yard pass with 37 seconds remaining to lead the Kansas City Chiefs past the Los Angeles Chargers.

Kentucky Derby winner back on track, '23 Derby contenders try out in Kentucky , Japan