Browns' Baker Mayfield to miss TNF matchup vs. Broncos due to shoulder injury

Oct. 20 (UPI) -- Cleveland Browns star quarterback Baker Mayfield was ruled out of his team's Thursday Night Football matchup against the Denver Broncos because of a nagging shoulder injury.

Backup signal-caller Case Keenum will get the start in place of Mayfield, who has been battling a torn labrum in his left, non-throwing shoulder.

Mayfield, who was a limited participant in Tuesday's practice, said earlier that day he planned to start against the Broncos and it would ultimately be his choice to make. The Oklahoma product noted that he would play in the game only if he felt the shoulder ailment wouldn't hamper his performance.

"Only I know how my body feels," Mayfield told reporters Tuesday. "If anyone questions whether I am hindering the team and going out there injured, that's just not right. It's my decision. I get to say whether I am able to play or not, and that's just how it is."

Mayfield initially suffered the shoulder injury Sept. 19 against the Houston Texans. The quarterback was attempting to tackle a Texans defender after throwing an interception.

The 26-year-old Mayfield continued to play through the injury and wore a harness on the shoulder for additional support, but he aggravated the injury during Sunday's loss to the Arizona Cardinals.

Mayfield is set to miss his first game since taking over the Browns' starting quarterback job in Week 3 of the 2018 season, snapping his streak of 51 consecutive regular-season starts.

Keenum will make his first NFL start since the 2019 season, when he played for the Washington Football Team. In the 2017 campaign, he guided the Minnesota Vikings to the postseason.

"I feel very ready," Keenum said. "I've been ready. You don't have to get ready if you stay ready."

The Browns also will be without star running backs Nick Chubb and Kareem Hunt for Thursday night's game against the Broncos. The pair of tailbacks are dealing with calf injuries. 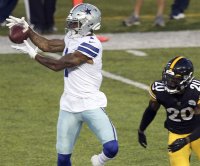