Oct. 11 (UPI) -- Kansas City Chiefs starting running back Clyde Edwards-Helaire will be out of the lineup for multiple weeks because of a left knee injury.

League sources told ESPN, NFL Media and the Kansas City Star on Monday that Edwards-Helaire sprained the MCL in his left knee during the third quarter of the Chiefs' 38-20 loss to the Buffalo Bills on NBC's Sunday Night Football. According to the outlets, the injury is expected to sideline the tailback for at least two to three weeks.

Edwards-Helaire was helped off the field by some of his teammates after getting sandwiched on a tackle with about eight minutes left in the third quarter. The running back caught a screen pass before multiple Bills defenders collapsed on him, causing his knee to bend awkwardly.

He finished with 13 yards on seven carries and one reception for 11 yards. Entering Sunday night's matchup, the LSU product recorded back-to-back 100-yard rushing games for the Chiefs.

Through the first five games of this season, Edwards-Helaire is the Chiefs' leading rusher with 304 yards.

Veteran tailbacks Darrel Williams and Jerick McKinnon are in line for additional work with Edwards-Helaire sidelined. Williams has rushed for 99 yards and two touchdowns and caught seven passes for 45 yards this year, while McKinnon has one carry for two yards and three receptions for 27 yards.

The Chiefs' loss to the Bills on Sunday night dropped them to 2-3 this season. 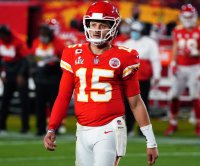