Former Alabama wide receiver DeVonta Smith is expected to be one of the first wide receivers selected in the 2021 NFL Draft, but faces skepticism because of his small stature compared to other playmakers in the class. File Photo by Hans Deryk/UPI | License Photo

Former Alabama quarterback Mac Jones is one of the most-talked about prospects in the 2021 NFL Draft class, with some mock drafts projecting him to go in the Top 3. File Photo by Ian Halperin/UPI | License Photo

Former Clemson quarterback Trevor Lawrence is expected to be the No. 1 overall pick by the Jacksonville Jaguars in the 2021 NFL Draft. File Photo by Aaron Josefczyk/UPI | License Photo

Former LSU wide receiver Ja'Marr Chase opted out of the 2020 college football season, but still is expected to be the first wide receiver picked in the 2021 NFL Draft. File Photo by Pat Benic/UPI | License Photo

Former Penn State linebacker Micah Parsons (11) is expected to be one of the first defensive players selected in the 2021 NFL Draft. File Photo by Ian Halperin/UPI | License Photo

April 28 (UPI) -- Nearly four months have passed since the last major college football game, but the stock of top prospects has gone up and down in recent weeks in preparation for the 2021 NFL Draft.

Former Clemson quarterback Trevor Lawrence remains the No. 1 overall pick in my latest mock draft, which features risers and fallers based on NFL transactions and pro day results.

Jacksonville Jaguars coach Urban Meyer said in March that the team was going in the "direction" of picking Lawrence, and it would be a shock if NFL commissioner Roger Goodell doesn't say Lawrence's name first at the draft Thursday night in Cleveland.

Many more questions surface from pick Nos. 2 through 32. Several off-season trades mean some teams moved up and others moved down in the the first-round draft order.

Some of those moves, like the San Francisco 49ers' acquisition of the No. 3 overall pick, signal the intention of that respective team. The 49ers gave the Miami Dolphins the No. 12 overall pick in 2021, two additional first-round picks and a third-round pick in 2021 in exchange for the third pick, which nearly guarantees the 49ers will draft a quarterback.

Lawrence, Zach Wilson, Mac Jones, Justin Fields and Trey Lance are among the top quarterback prospects in the draft class. NFL teams have the prospects ordered differently on their respective draft boards. Fans could see some teams attempt to pull off draft-day trades to move up in the order to acquire their preferred prospect.

My previous two mock drafts did not feature trade predictions because I expected a bevy of NFL transactions to occur this off-season. I included one predicted trade in this mock draft. I expect the New England Patriots to make a swap with the Detroit Lions, so they can move up and acquire a top quarterback prospect.

Lawrence is penciled in as the top overall pick in the 2021 NFL Draft and I don't expect anything to change when Roger Goodell takes the stage to announce this pick.

"You're always looking for the stars to align when you're looking at prospects, whether that be from a physical, mental, character," Jaguars general manager Trent Baalke told reporters April 21.

"Whatever the case may be. With [Lawrence's] situation ... like many others in this draft, the stars all align. And that's what you're looking for."

The New York Jets were one of the biggest wild cards for the 2021 NFL Draft until they traded quarterback Sam Darnold to the Carolina Panthers this off-season. They are expected to select a new quarterback with the No. 2 pick.

The Jets will have their choice of Zach Wilson, Justin Fields, Trey Lance or Mac Jones for a pick that could alter the franchise for the next decade. Wilson has high upside, though he is unproven against the toughest competition. I expect the Jets to take the risk and draft the former Cougars star, who boasts a strong arm and ability make big plays on the run.

Justin Fields was the No. 3 pick in my last mock draft, but recent reports suggest that the San Francisco 49ers will select Mac Jones or Trey Lance with this pick.

The 49ers surrendered a lot of draft capital to acquire the No. 3 overall pick from the Miami Dolphins this off-season. I believe they made that move to have a shot at Mac Jones or Fields, as those quarterbacks had the best combination of resume and talent and still will be available.

"I like that [Jones], along with four other guys [top quarterback prospects], I think is capable of being our starting NFL quarterback and capable of winning with," 49ers coach Kyle Shanahan told reporters Monday. "I think there's five guys there.

"That's been the biggest thing with all of this. Once you make an organizational decision that we need to get a starting quarterback, you look into all the options of how to get them and you watch the ones you felt you had an option with, and then you look into the college and where you think you can to get them.

"I wanted to get it into a spot where I knew we'd for sure get one and hopefully knowing the first two that are going, we could end up getting our favorite one."

The Atlanta Falcons could choose a quarterback here, but I think Kyle Pitts is too hard to pass up. The former Florida tight end easily is one of the best talents of the draft class and can be plugged into any offense. A Falcons arsenal of Matt Ryan, Julio Jones, Calvin Ridley and Pitts could be hard to stop.

Joe Burrow's college teammate Ja'Marr chase still could be on the board for this pick, but the Cincinnati Bengals have to pass up the flashy pass-catcher and grab some protection for their franchise quarterback. Sewell has ideal size and is extremely agile for an offensive tackle. He could anchor the Bengals offensive line for the next decade.

"We went to [Sewell's] pro day," Bengals coach Zac Taylor told reporters Monday. "He is big, athletic, powerful and can do a lot of things really well. He had a good workout and you can see why he has put himself in position to be a top pick in the draft."

Miami Dolphins wide receivers struggled to create separation in 2021. The selection of Ja'Marr Chase with the No. 6 overall pick should give quarterback Tua Tagovailoa a trusted receiving option for years to come.

The electrifying Chase stands just over 6 feet and weighs about 200 pounds. His size and leaping ability should inject explosiveness into the Dolphins offense and give balance to the team, which already boasts an extremely energetic and aggressive defense.

Justin Fields is my No. 2 quarterback prospect for this class and likely holds that same value for several NFL teams. I think the New England Patriots value Fields enough to swing a draft-day trade to move up in the order and acquire the former Ohio State quarterback.

A trade with the Detroit Lions for the No. 7 overall pick makes a ton of sense. The Lions likely won't take a quarterback this year and have plenty of needs on offense and defense. The Patriots are going to have to offer a lot to move up from No. 15, which should assist in the Lions' franchise rebuild.

The Philadelphia Eagles' offense desperately needs another skilled pass catcher. DeVonta Smith is one of my favorite wide receivers in the draft class and was the best offensive threat in college football in 2020.

I think Smith, who has been dropping in mock drafts due to his small stature, will enter the league with a chip on his shoulder. The reigning Heisman Trophy winner could prove to be a fan favorite for the Eagles with his ability to consistently beat defenders, fight for catches through traffic and get into the end zone.

I believe the Detroit Lions want a wide receiver in the first round of the 2021 NFL Draft and don't need to be in the Top 7 of the order to acquire one of their favorite targets.

Waddle has drawn comparisons to Tyreek Hill for his explosiveness, something the Lions offense lacks. This would be a home run pick for the Lions as it fills a need and nets the franchise extra picks to build a talented roster for years to come. 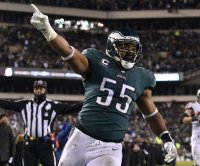