Hayes, 33, told ESPN before being hospitalized last month that he had been placed on a waiting list for a liver transplant at the Mayo Clinic and Northwestern Medicine in December.

The former linebacker has been hospitalized more than 20 times in the past year because of liver disease, which he was diagnosed with two years ago.

Hayes, who played for the Buccaneers from 2008-11, was diagnosed with the liver condition while being treated for an unrelated medical issue.

He believes the use of non-prescription pain medications during his playing career is what caused the condition, along with a family history of liver disease.

"The first diagnosis they gave me was alcoholic cirrhosis," Hayes previously said to ESPN. "But when we dug in deeper, it became just chronic liver disease, because I don't drink like that. If I did drink, it was just like wine or something like that. But my body is made different. And that's what [my doctor] said, 'Everybody's made different.'"

NFL // 17 hours ago
Matthew Stafford, Rams crush Cardinals, advance to divisional round
Jan. 18 (UPI) -- Veteran quarterback Matthew Stafford earned his first career playoff win, throwing for two scores and running for another in a dominant Los Angeles Rams victory over the Arizona Cardinals in the 2022 NFL wild-card round. 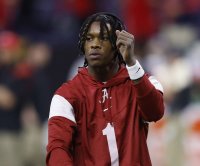