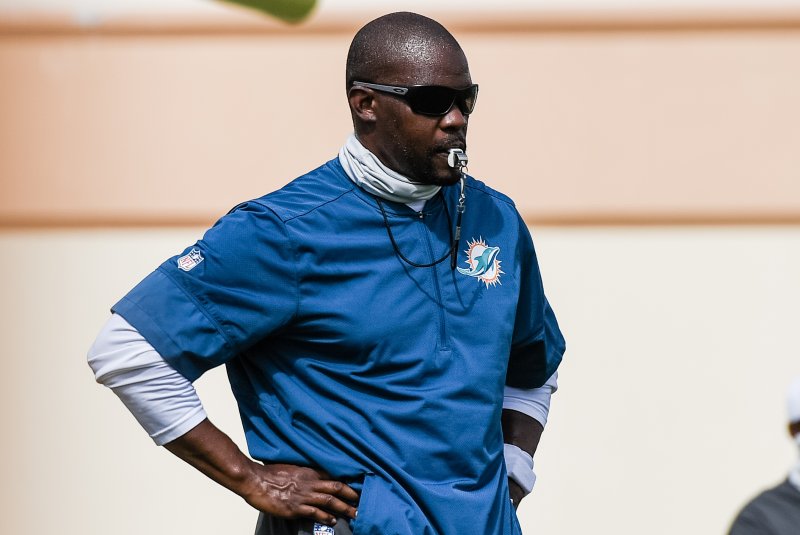 Coach Brian Flores and the Miami Dolphins are one of several teams willing to trade back in the order in the first round of the 2021 NFL Draft. Photo by Carlos Goldman/Miami Dolphins

MIAMI, April 22 (UPI) -- The Miami Dolphins, Carolina Panthers and New York Giants are among the teams linked to potential trades down from their current slots in the first round of the 2021 NFL Draft.

Dolphins general manager Chris Grier acknowledged the possibility when he spoke to reporters Wednesday in a Zoom video conference.

"I think we'll always listen to everything," Grier said of potential trade negotiations. "We've shown that. I think you owe it to your team and your organization to always listen to any offers that may or may not come.

"As the draft falls and gets towards our pick, if someone wants to call and they make an aggressive pitch to us, we'll evaluate it, look at the board and look at our options and we'll make the decision that's best for the Miami Dolphins at that point."

The Dolphins own the No. 6 overall pick in the draft. They acquired the sixth pick through two trades this offseason with the San Francisco 49ers and Philadelphia Eagles, respectively.

The Jacksonville Jaguars, New York Jets and San Francisco 49ers each are expected to select quarterbacks with the first three picks in the draft. The Atlanta Falcons and Cincinnati Bengals own the No. 4 and No. 5 picks, respectively.

Several teams with later first-round selections than the Dolphins might desire a quarterback or another highly-rated prospect and need to trade for an earlier pick to ensure that they acquire that player.

The Panthers own the No. 8 overall pick. They were among the teams previously linked to a top quarterback prospect, but traded for former Jets quarterback Sam Darnold this off-season. Panthers general manager Scott Fitterer said after that deal that the team could make a move on draft day.

"What we wanted to do going into this draft, through free agency, through this trade with Sam, was to just get rid of all the needs we have," Fitterer told reporters April 5. "We wanted to get to a place where the roster was in a good spot, and we could take the best available player at No. 8.

Sources told ESPN on Tuesday that the Panthers have had discussions with other teams about trading back from the No. 8 slot. Sources also told NFL Network that the Giants are "internally considering" a move down from the No. 11 overall pick in the draft.

The 2021 NFL Draft is from April 29 through May 1 in Cleveland. ESPN, ABC and NFL Network will air all seven rounds.