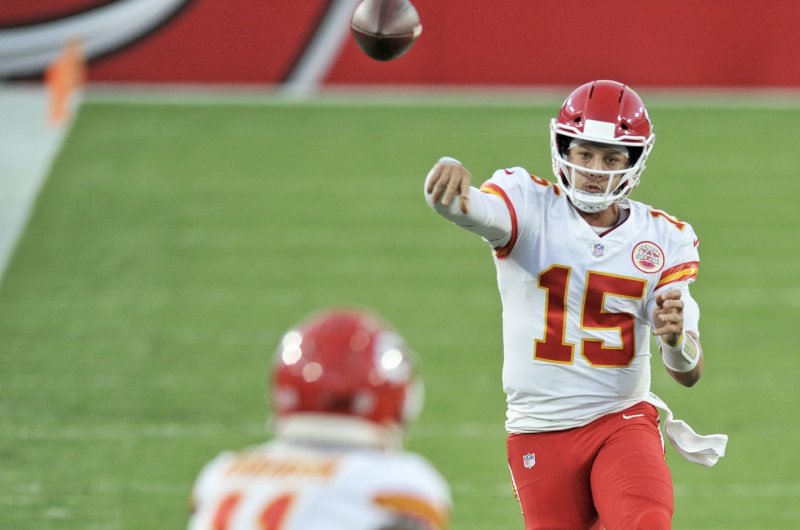 Kansas City Chiefs star Patrick Mahomes was designated as the starting quarterback for the AFC in the 2021 Pro Bowl. File Photo by Steve Nesius/UPI | License Photo

Dec. 21 (UPI) -- The NFL unveiled the complete AFC and NFC rosters for the virtual 2021 Pro Bowl on Monday, with the Kansas City Chiefs, Green Bay Packers, Baltimore Ravens and Seattle Seahawks leading the way in selections.

The Chiefs, Packers, Ravens and Seahawks each had a league-best seven players selected to the upcoming Pro Bowl. Kansas City's Patrick Mahomes and Green Bay's Aaron Rodgers were designated as the starting quarterbacks for their respective conferences.

Buffalo Bills quarterback Josh Allen and Deshaun Watson of the Houston Texans joined Mahomes on the AFC roster. For the NFC, quarterbacks Russell Wilson of the Seahawks and Kyler Murray of the Arizona Cardinals were behind Rodgers.

The Dallas Cowboys were among five teams without a Pro Bowl selection, with the others being the Jacksonville Jaguars, Carolina Panthers, New York Jets and Cincinnati Bengals. This is only the third time in franchise history that Dallas didn't have at least one Pro Bowl player -- 1986 and 1989 being the other years.

The 2021 Pro Bowl was initially scheduled to take place Jan. 31 in Las Vegas, but the annual game was canceled because of the ongoing COVID-19 pandemic. Instead, the league is working with EA Sports to stage a week-long virtual experience, culminating with Pro Bowl players competing within the Madden NFL 21 video game.

Roster selections were determined by voting among players, coaches and fans. There were 26 first-time Pro Bowlers this year.