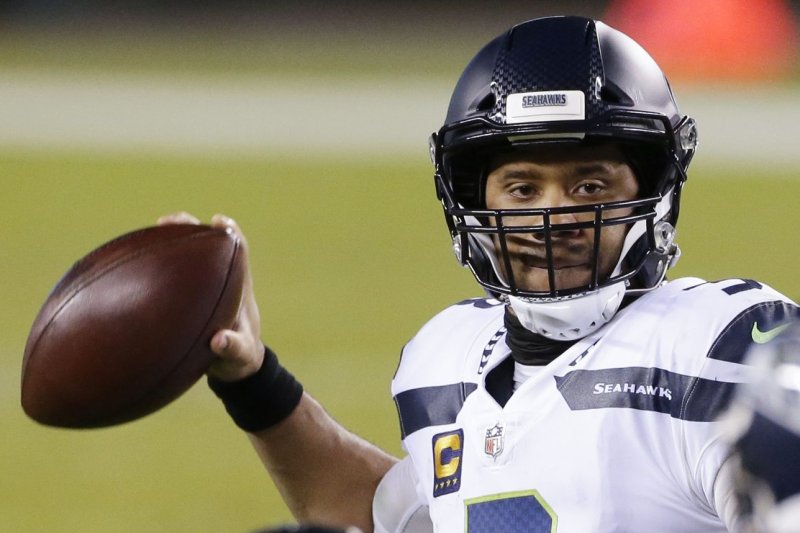 Seattle Seahawks quarterback Russell Wilson has struggled in recent weeks, but is my No. 1 fantasy football option for Week 14. File Photo by John Angelillo/UPI | License Photo

I also would consider starting Sam Darnold this week -- but only if you are extremely desperate at the position and in a league with at least 14 teams.

Monitor the status for each of your players' games this week as the coronavirus pandemic continues to impact the NFL schedule and player availability. Bye weeks have ended, so you should have more options when it comes to finding good defensive matchups for your quarterback.

Check out my article on the players with the easiest and hardest playoff schedules for an idea of who to start -- and who to avoid -- this postseason.

Russell Wilson looked like the league's runaway MVP earlier this season, but has struggled lately. The Seattle Seahawks star ranks outside the Top 20 quarterbacks for fantasy points per game over his last four appearances.

Despite his latest struggles, Wilson remains my top option at the position for Week 14. The Seahawks face the New York Jets on Sunday. The Jets have allowed the third-most fantasy points per game to quarterbacks.

I expect Wilson to throw for at least 300 yards and three touchdown passes in the first round of the fantasy football playoffs.

Los Angeles Chargers rookie Justin Herbert has thrown just one touchdown pass over his last two games after he had a streak of seven consecutive games with at least two touchdown passes per game. I expect the Chargers quarterback to throw all over the Atlanta Falcons in Week 14.

The Falcons have allowed the most fantasy points per game to quarterbacks. Herbert should throw for at least 300 yards and have three touchdown passes in this matchup. He is my No. 2 option.

Lamar Jackson has recovered from COVID-19 and looks to rebound from his early season struggles down the stretch. The Baltimore Ravens' quarterback had one of his best fantasy football performances of the season in Week 13, with two touchdown passes and 94 rushing yards and another score on Tuesday against the Dallas Cowboys.

I expect Jackson to keep that momentum in Week 14, when the Ravens battle the Cleveland Browns. The Browns have been one of the best teams in the AFC this season, but have struggled against the pass. They have allowed the fourth-most passing touchdowns in the NFL.

I expect Jackson to throw at least two touchdown passes and rush for 80-plus yards. He is my No. 3 quarterback.

Tennessee Titans quarterback Ryan Tannehill is my No. 7 option. Tannehill had one of his best fantasy football performances of the season in Week 13, with 389 passing yards and three scores in a loss to the Cleveland Browns.

He has now thrown at least two touchdown passes in two of his last three games. I expect Tannehill to throw another two touchdown tosses this week when the Titans face the Jacksonville Jaguars.

The Jaguars have allowed the fourth-most fantasy points per game to quarterbacks. They also are tied for allowing the second-most passing touchdowns to the position.

Start Tannehill as a Week 14 streamer.

Atlanta Falcons quarterback Matt Ryan is my No. 8 option. Ryan has had very tough defensive matchups as of late, but gets a respite in Week 14 when the Falcons face the Los Angeles Chargers.

The Chargers have allowed the sixth-most fantasy points per game to quarterbacks. I expect this game to be a shootout, with Ryan and Chargers quarterback Justin Herbert throwing all over the field. Ryan is a must-start QB1.

Sam Darnold is not someone you should rush to put in your quarterback slot, but you could do worse if you are desperate at the position. The New York Jets quarterback is a deep sleeper as he has a great matchup in Week 14 against the Seattle Seahawks.

The Seahawks have allowed a league-high 3,877 passing yards and the second-most fantasy points per game to quarterbacks. Darnold threw two touchdown passes and rushed for another score in Week 13 against the Las Vegas Raiders.

I can see another two-touchdown, high-yardage performance from Darnold on Sunday in Seattle. He is my No. 18 option.