Patriots use trick play to stun Ravens on 'SNF' 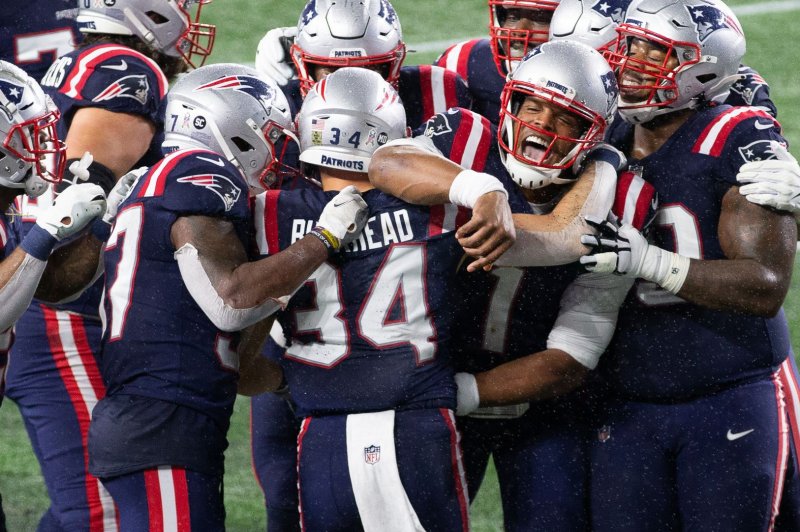 New England Patriots quarterback Cam Newton (1) hugs running back Rex Burkhead (34) after Burkhead caught a touchdown pass on a trick play to give the Patriots the lead in a "Sunday Night Football" win over the Baltimore Ravens on Sunday in Foxborough, Mass. Photo by Matthew Healey/UPI | License Photo

New England Patriots running back Damien Harris (C) had a career-high 121 rushing yards on 22 carries in a win over the Baltimore Ravens on Sunday in Foxborough, Mass. Photo by Matthew Healey/UPI | License Photo

Baltimore Ravens quarterback Lamar Jackson (8) had two passing touchdowns, an interception and 55 rushing yards in a loss to the New England Patriots on Sunday in Foxborough, Mass. Photo by Matthew Healey/UPI | License Photo

Nov. 16 (UPI) -- Running back Damien Harris piled up 122 rushing yards and the New England Patriots pulled off a trick play to score the go-ahead touchdown in an upset victory over the Baltimore Ravens on Sunday Night Football.

The Patriots trailed 10-7 about 5:30 before halftime before wide receiver Jakobi Meyers connected with running back Rex Burkhead for a 24-yard touchdown to spark the 23-17 win on Sunday in Foxborough, Mass.

"It was something we practiced over the past couple weeks, just never know when it's going to come up," Meyers told reporters. "I'm surprised that it came up during a rain game, but you know I still got a little bit. And I know I had Rex out there.

"Rex is a playmaker. ... I put the ball in the sky and let him take a chance on the ball. I just put the ball up there, he did the rest. "

Patriots quarterback Cam Newton took the snap at the start of the play. Newtown then made a quick left turn and threw a lateral to Meyers.

The Patriots wide receiver -- who played quarterback in high school -- then dropped back before he launched a high-arcing throw down the right flank. The lob then fell between two defenders and landed in Burkhead's hands just as he crossed the goal line.

The Patriots then outscored the Ravens 10-7 in the second half to secure the upset.

Ravens quarterback Lamar Jackson gave his squad an early edge with a six-yard touchdown toss to Willie Snead at the start of the second quarter. The Patriots answered on the next drive when Newton threw a seven-yard touchdown strike to Burkhead.

Justin Tucker then made a 24-yard field goal to give Baltimore a 10-7 lead before the Patriots snatched away momentum with the trick play.

Newton pushed the Patriots lead to 20-10 when he ran for a four-yard score on the first possession of the second half. Nick Folk added a 20-yard field goal on the Patriots net drive. Jackson responded by throwing another touchdown toss to Snead on the Ravens next drive, but neither team added points to the scoreboard over the remaining 15:14.

Newton completed 13 of 17 passes for 118 yards and had a passing score and a rushing score. Jackson completed 24 of 34 passes for 249 yards, two scores and an interception. He also had 55 rushing yards.

The Ravens outgained the Patriots 357 to 308 in total yardage in the loss.

"We're finding ways to win and that's pretty much been it," Newton said. "We're having great weeks of practice and following it up with in-game performance.

"Coach [Bill Belichick] preached about that and we just have to make sure that we keep doing that and keep moving forward."

"We're ticked off," Jackson said. "Nobody likes losing. None of you guys [reporters] would like it, especially when we have a lot of talent on our team. We've just got to regroup."